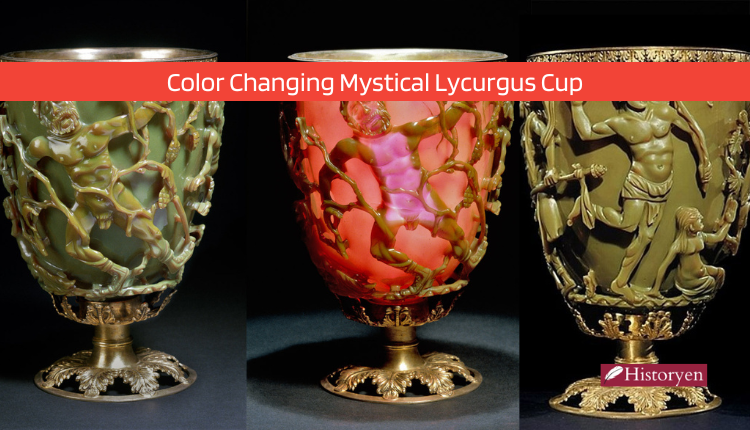 Ancient Romans sometimes invented in front of their time. The famous Lycurgus Cup, which is currently exhibited in the British Museum, is proof that Romans have developed in science and nanotechnology. This 1600 -year -old glass can change color between green and blood red depending on the direction of lighting. When the light source is in front, the goblet appears green, and when the light source is behind, it appears red. This is called dichroic behavior.

It is not known whether the Roman craftsmen who created this work of art were aware of this science or by chance. The Romans first discovered the potential of nano particles. This glass is the best example.

The Lycurgus Cup is a very rare Roman Diatretum. The glass is carefully cut and a decorative cage is built on the surface. Instead of an abstract geometric design, beautifully detailed human figures are engraved on the cup. This human figure describes the legendary King Lycurgus, who tries to kill Ambrosia, the follower of God Dinysus. Dionysus and two followers are mocking the king.

The Lycurgus Cup is thought to have been produced in Rome or Alexandria around 290-325 AD. The cup was in excellent condition when found, so it is thought that it was never buried. It was always held as a treasure in a noble Roman villa, then in the church and eventually in the collections of the elite. Another possibility is the possibility that it is in a sarcophagus. Some people think that the cup was looted from the church during the French Revolution in the 1800s. The cup was worn out due to time and use.

The Lycurgus Cup was mentioned in the French writings in 1845. As it was understood from the articles, no one knew why the glass changed color at that time. The British Museum bought the cup in the 1950s and did not exhibit until 1990. During these years, researchers uncovered the secret by examining the broken pieces of the mug under an electron microscope. The craftsmen who produced the cup were really nanotechnology pioneers. Tiny gold particles had been added to the glass at a microscopic level. The gold added to the glass makes the glass red color, just like the stained-glass windows.

It is unclear whether the Roman craftsmen deliberately impregnated with gold and silver particles. The researchers found very very small particles. The exact ratio of the mixture of precious metals in the pieces found suggests that the Romans certainly know what they are doing.

During the Renaissance, it was believed that the glasses and glassware made on the island of Murano in Venice Lagoon would tremble and shattered when poison was poured. The false marketing method that created this superstition targeted the very wealthy and the ruling class. The Lycurgus Cup could also have been produced for this purpose for a wealthy.

Those in the ruling class knew Dichroic cups. They were giving these cups as a gift, exhibiting them in their showcases and drinking drinks from them on special occasions. However, we know that there are only a few Roman Dichroic glass objects. So far, 10 dichroic glass objects have been found and all except the Lycurgus Cup were in pieces. These rare objects were purchased only by privileged Romans.

There are even some ancient texts discussing these glass objects. These glasses were mentioned in the letter written by the Egyptian Emperor Hadrian to his brother-in-law Severianus in Rome at the beginning of the 4th century AD. Hadrian, in his letter, “I sent the party cups that changed color to you. These cups were presented by the priest of a temple. I dedicated them to you and my sister. I want you to use them on banquet days.”