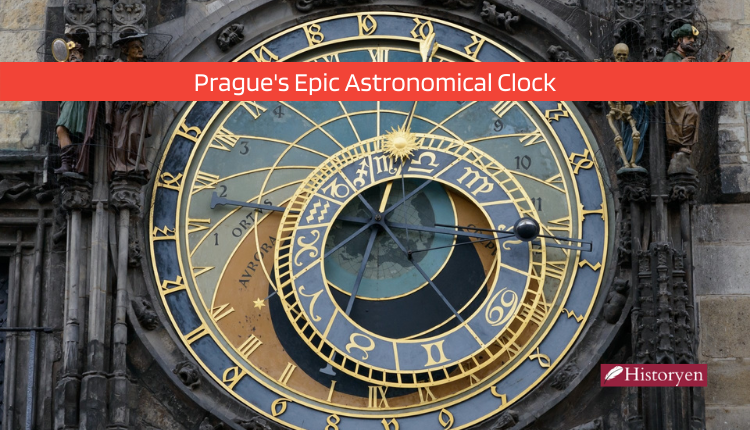 The Prague Astronomical Clock is located under a huge tower in the middle of the Old Town Square. It has a wonderful appearance in terms of colors and shape and has been the subject of many mythologies. This clock with a mechanical mechanism and gold hands is the oldest working astronomical clock in the world. Located in Prague, the capital of Czechia, the clock is located right in the heart of the old town. Wenceslas Square is the cobbled lane where the pedestrian-only streets of the old town intersect.

Myths About the Astronomical Clock

The Prague Astronomical Clock is the world’s oldest working astronomical clock and was made in 1410. According to rumors, the clock was made by a skilled craftsman, Master Hanus, according to other rumors, by Jan Sindel and Mikulas of Kadan. It is said that the city council members of that time were amazed by the beauty of the clock and were afraid that Master Hanus would build such a clock in another European city, so they caught it and blinded it on a dark night. Because Prague was not the only one who admired the clock, there were also foreign officials trying to reach Hanus. The most extensive search to find the clock’s maker revealed that the creator of the astronomical clock was Mikulas, the Imperial clockmaker from Kadan.

This clock, which has the name Orloj in Czech, has been the symbol of the city for 622 years since it was made. At the beginning of every hour, the figures on the edges of the clock come to life, two windows open and the 12 apostles greet the city. Next to the clock is a skeleton ringing the bell, after which a golden rooster crows and the huge bell at the top of the tower rings. One of the moving figures, carrying an hourglass in his hand, represents the approach of death. There is a statue that represents the vanity and has a mirror. One belief states that at the first rooster crow of the morning, demons and ghosts flee from Prague. The golden rooster was added to the clock in 1865.

The clock, which has been damaged many times, has been repaired and renewed. Consisting of nearly 400 parts, 300 parts of the clock are still standing as they were originally made, while other parts were repaired at different times. Prague residents highly value this astronomical clock. The cost of the restoration of the clock, which was badly damaged in the great fire in the 1850s and in the Second World War, was collected by the citizens of the city. Many of the figures on the clock are replicas because their real ones were damaged by the Germans at the end of the Second World War.

The building with the clock was used as the tower of the town hall in the 15th century. While the upper part of the clock shows the time, the lower part is actually a calendar. Those who know how to read the calendar can learn about astronomical cycles and Christian Holidays from this calendar. The clock displays not only Prague time, but also Celestial, Old Czech – Italian time, Central European and Babylonian time. It is also possible to see the relative position of celestial bodies and Zodiac constellations on the clock. The calendar, which includes replicas of Josef Manes’ paintings, shows which zodiac sign currently prevails. The astronomical dial was widely used in medieval timekeeping.

It is said that the clock will stop when Prague City and the rest of Czechia are in danger. And eerily, before the great flood of 2002, this clock had stopped. Prague, one of the most popular touristic cities in Central Europe, hides great elegance and beauty inside. With parks, awe-inspiring architecture, historical monuments and extensive gardens, this city is a frontier of the Modern West.