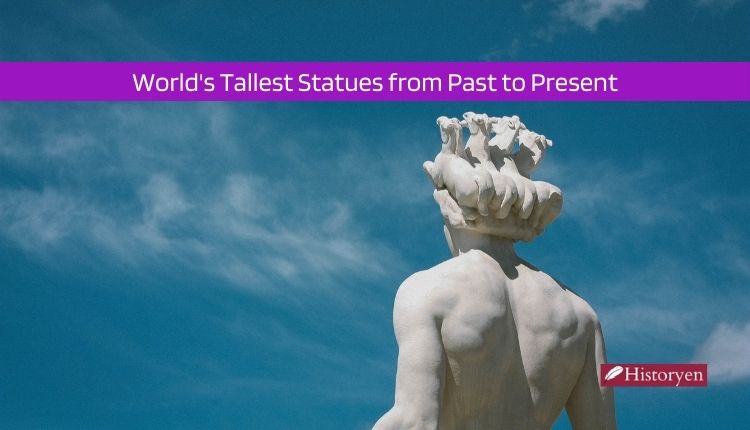 Statues are works that symbolize the most important history of countries. Since centuries ago, they symbolize the most important people or historical events. Today, the existence and importance of sculptures still continue. In some countries, statues are given so much importance that the size and length of the statue reach gigantic proportions. According to the belief, the bigger a statue, the more important and valuable the meaning it has. We will try to include the tallest statues from the past to the present in the list of the world’s tallest statues we have prepared for you.

Statues are objects of artistic expression that represent abstract ideas and are most often addressed to animals or people. Statues can have historical, religious and cultural significance. Ancient people carved statues to mark historical events, and in some cases burial ceremonies. In ancient times, soldiers were building statues in the belief that they had mysterious powers to ensure victory in battle. The importance of statues has evolved over the years and is seen as an art form in today’s age. Some of the statues are stored in museums all over the world in order to preserve the culture.

There are many statues in the world between 50 and 200 meters in length, but we have compiled a list of the most known and tallest statues. Note that these statues still exist today. And here is the list of world’s tallest statues:

The statue of Patel, which is 182 meters long, is in the Indian state of Gujarat. It was made with the aim of commemorating Sardar Vallabhbhai Patel, the independent leader of India. Patel was the most important figure in the unification of the states of India after its independence.

It was built in Henan, because it is the destination of Buddhist pilgrimages and occupies an important place in Chinese Buddhist history. Decked out among lush hills, it is a hub for tourists from all over the world. The Buddha Spring Temple has both religious and cultural significance.

Built in China, this statue was built with the belief that it would protect China and the world. Built in 6 years, Guanyin Nanshan is one of the most important symbols of the Buddhist faith.

Even if it is not actually the tallest statue in the world, it is possible to say that it is the most popular statue. It was held in France in 1884. The 7 pointed ends of the crown at the head of the statue symbolize 7 continents or 7 seas.

This 91-meter statue, built on the Mamayev Kurga hill in Russia, was designed by sculptor Yevgeniy Vucetic. The statue is designed as a female figure with a sword in her hand, urging those behind her to defend against the enemy.

The statues have historical, cultural and religious significance. After many years of attracting the attention of tourists, the statues are now considered a supporter of tourism. The statues made in very ancient times mostly reflected the religious faith of that period. Wherever we go in the world, it is inevitable to see a small or large statue in the city we are in. Buddha statues, which are commonly made when we go to the far eastern country, are statues that are worth seeing. There are even day tours organized just to see these huge statues.