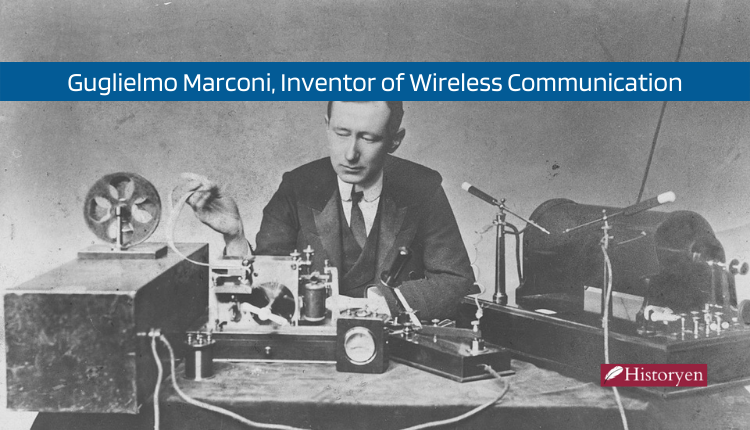 Guglielmo Marconi was born on April 25, 1874, in Bologna, Italy. His father was a wealthy Italian landowner, Giuseppe Marconi, and his mother was Irish Annie Jameson. He also had a brother. Known as an Italian physicist and inventor, Marconi is famous for developing the practical wireless telegraph and was awarded the Nobel Prize in Physics.

Guglielmo received his education privately in Bologna, Florence and Leghorn. From childhood he was interested in electricity and physics. He studied the research conducted by Sir Oliver Lodge on electricity and lightning, the mathematical work of James Clerk Maxwell, and the experiments of Heinrich Hertz.

Marconi thought that wireless communication could be established using the radio signal method. In 1895 he began experimenting on this subject at Pontecchio. Marconi, who was able to send a radio signal a mile and a half away in a short time, conducted experiments that focused on concentrating the electric current in one direction rather than spreading it in all directions.

Furthering his work in 1896, Marconi went to England to obtain a patent for what he produced. In the same year, he patented the world’s first wireless telegraph system. He built a system in London capable of transmitting radio signals across the Bristol Canal and Salisbury Plain. Marconi, who founded the Wireless Telegraph & Signal Company Limited in 1897, established a wireless connection between France and England over the English Channel in 1899. In the same year, he organized the radio broadcast of the America Cup in the United States. He patented the tuned or cystonic telegraph in 1900 and installed permanent wireless stations in many places. His research on radio waves and their applications had become a reference point for research in his youth.

Marconi paid little attention to theoretical speculation and preferred to be practical in his projects.

Marconi succeeded in transmitting the first wireless signals 2100 miles across the Atlantic in 1901. Proving the effect of daylight compared to wireless communication, Marconi also patented the magnetic detector, which has been used as a standard wireless receiver for many years. In 1905 he patented the horizontal directional antenna and in 1912 he patented the timed spark system to generate continuous waves.

Joining the Italian Army in 1914, Marconi served as a lieutenant in the army. He was later promoted to captain and appointed navy commander in 1916. In 1919 he received the Italian Military Medal for his service in the wars. He greatly helped the army by using wireless communication systems in the military.

In 1932, at the age of 58, he succeeded in establishing the world’s first microwave cordless telephone connection. He later designed a microwave lighthouse for ship navigation. While still continuing his experiments and studies, Guglielmo Marconi died in Rome on July 20, 1937, after consecutive heart attacks.

113 years have passed since Marconi won the Nobel Prize in Physics in 1909. Technologies such as television, satellite, smartphone and radio that we use now are all based on the wireless technology that Marconi pioneered. Marconi, who was the first to design and perfect the new wireless communication system, also characterized our daily activities.