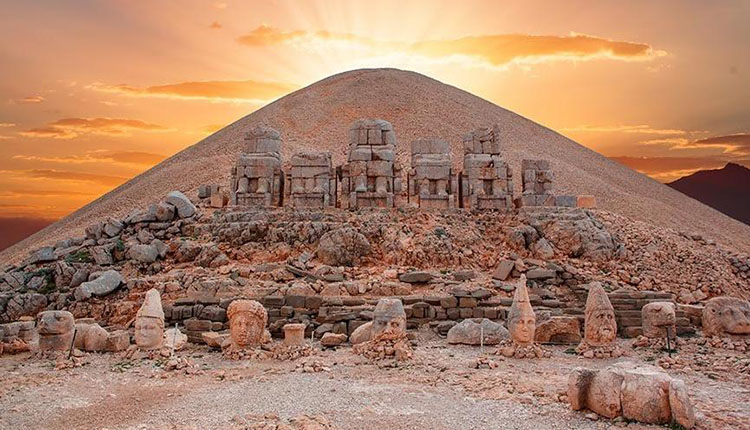 Throughout history, many kings have wanted to become an unforgettable legend. Many of them failed to achieve this. However, the legend of Mount Nemrut is very unlike these. Here is the story of the unforgotten king of Mount Nemrut, which has been the subject of research with ruins!

Where is Mount Nemrut located?

Mount Nemrut, located in Turkey’s Adiyaman district and is a globally renowned place. Mount Nemrut has hosted many civilizations other than itself. Which has remained from the Commangene Kingdom to the present day, is a place famous for its historical artifacts and legends.

When was Nemrut included in the World Heritage List by UNESCO?

Mount Nemrut is a place close to the Taurus Mountains and is located at an altitude of 2150 meters and has sculptures and epitaphs. Due to the fact that it has a view of the Euphrates River and is located in an elevated area, it is very difficult to reach. But the view is just as breathtaking. Many archaeological ruins belonging to the Kingdom of Commangene make the place special.

The Kingdom of Commangene is a civilization founded in 162 BC in today’s Mesopotamia and even if it could not continue its kingdom for many years, it is a civilization that left behind beautiful archaeological artifacts in terms of history and culture.

Antiochus Thoes I, who came to the throne 120 years after the establishment of the Commangene Kingdom and succumbed to time while pursuing immortality, had tens of statues of gods built on the summit of Mount Nemrut along with the tomb he built himself. The reason for this was the word Nemrut, which gave this mountain its name. (The word Nemrut means immortal.)

King Antiochus’ main goal was to unite all the cultures living in his region. This was because many different cultures lived in his kingdom, including Armenians, Romans and Persians. This desire of Antiochus gave birth to legends. This is why the history of Christianity, astrology, Greek mythology, Judaism and many other beliefs have intersected with Nemrut.  The reason for this is the sculptures built on Mount Nemrut and completed with stones. Sculptures of many gods and epitaphs from different religions and different beliefs were made.

When were the Structures in Nemrut Discovered?

The Kingdom of Commangene was conquered by the Roman Empire in 72 AD. Following this conquest, Mount Nemrut was left alone for about 2000 years. Until the German engineer Carl Sester, who was commissioned by the Ottoman Empire in 1881. As a result of his research, Carl Sester reported the existence of this historical place to the German Consulate in Izmir. However, during this report, Sester said that these ruins belonged to the Hittite civilization as he could not see the epitaphs. As a result of the subsequent excavations and research, it was understood that the epitaphs were written in Greek. It was then revealed that the ruins belonged to the Kingdom of Commangene.

What is written in the epitaphs on Mount Nemrut?

The inscriptions written in Greek behind the statues of the gods on Mount Nemrut contain the testament of King Antiochus and also what can and cannot be done in the temple. All of the inscriptions in the epitaphs were written by King Antiochus. In these inscriptions, there are many duties and recommendations for the person who will come to the throne after him. At the same time, warning the kings who will come after him to beautify and respect this temple, he also expresses his praise for the visitors who come to worship. It states that each visitor will be welcomed with interest and at the same time, curses for those who will come to this place of worship with bad intentions are also included in the epitaphs written in these inscriptions.

How Many God Sculptures Are There on Mount Nemrut?

According to the epitaphs written, there are 5 sculptures on Mount Nemrut. These sculptures are King Antiochus (Theos), Heracles (Ares-Artagnes), Zeus (Oromasdes), Fortuna (Commagene goddess) Apollo (Mithras).

Why have Historians done so much research in this region?

Many historians and researchers have researched on Mount Nemrut. The biggest reason for this was the inscriptions , who tried to unite many cultures. Even though it was written in the inscriptions that the tomb of King Antiochus was also there, Antiochus’ tomb could not be reached. After many historians and writers did research on this subject, 3 possibilities emerged.

Of all the possibilities here, the third one is the most likely to be real. This is because Nimrod is so important to Orthodox Christianity that the Orthodox were able to find the tomb and take it with them.