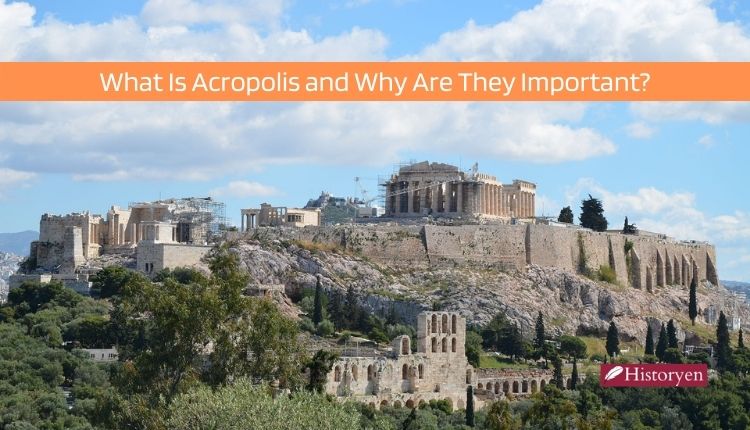 Acropolis is a term created by combining to Ancient Greek words acro and polis. Acro used to refer to high and as you can guess polis refers to the city. In summary, Acropolis is a term that is used to define cities established on high grounds. In ancient times, staying on the high ground used to provide many benefits, especially for raids. These cities allowed patrol units to observe their around well and notice any possible risk or danger beforehand. Therefore, most of the acropolis establishments managed to survive until today when compared to the regular establishments.

In addition to this, each city used to have an acropolis in Greece due to the above-mentioned benefits. They used to be considered as the most important parts of each settlement area due to the number of nobles who lived in these areas. However, they were not regular settlements, all kinds of temples, treasuries, and other government bodies were built in these areas due to their protection levels. They were also used as a sanctuary by the community in case of any raid or war.

As of the 5th Century BC, acropolises began to be used for religious ceremonies. This is mainly because lands in these areas become more secure and people did not need to observe them around for possible raids. There were many acropolises in Ancient Greece, Greece, and Anatolia. However, only some of them managed to survive until today. Some of the most popular acropolises are Assos, Olympos, Arykanda, Kaunos, Phaselis, and Pergamon.

The most important acropolis in the world is Atina Acropolis. It was built in Attic valley during the Neolithic Age. New structures such as houses and a palace were built around the 3rd century BC. Some of the popular structures that managed to survive are Parthenon, Propylaeon, Athens Temple, and Erethyon. You have a chance to visit this acropolis and witness all these structures, which were built in BC.

Differences Between Acropolises and Ancient Cities

Sumerian Ziggurats, the Throne of Gods

The Bombing of Guernica by Picasso