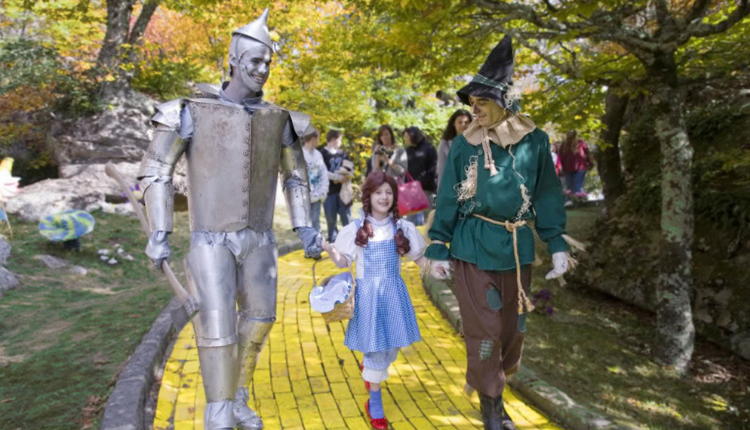 We’re Off to See The Wizard of Oz (The Land of Oz, Beech Mountain, North Carolina)

It is said you can never go home again, but in Beech Mountain, North Carolina, that’s not exactly true.

Most everyone knows the story, but for those who don’t, here’s the abridged version: It’s 1939 and Dorothy Gale, and her loyal dog Toto, live with her Auntie Em and Uncle Henry on a large farm in Kansas. Dorothy runs away, thinking she is unloved, misunderstood, and in the way. By the time she realizes her family really does love her, a tornado is about to drop directly upon their farm. Everyone heads to the tornado cellar, but Dorothy gets there too late. The wind makes it impossible for her to open the cellar door, so she scoops up Toto and runs into the house, hoping they’ll be safe.

With the wind swirling mightily, the house is picked up from the ground and flies around the air. Dorothy gets hit in the head by a piece of flying debris. It knocks her out and she spends the rest of the movie in a wondrous land called Oz, walking down a yellow-brick road. She wears red ruby slippers she got when her house landed, killing the Wicked Witch of the East in the process.

She joins with a strange cast of characters, embarking on a quest given to her by the Wizard of Oz. In order to return to her own home in Kansas, he has decreed that she must kill the Wicked Witch of the West. In the end, she realizes that she has never really left home anyway, and clicking her heels together three times, she awakens to find Auntie Em faithfully sitting vigil by her bedside.

Sounds fantastic, right? Just a story? Not to L. Frank Baum, the author of “The Wonderful Wizard of Oz,” and 13 other books about Oz. And not to the owners of The Land of Oz, tucked away in beautiful Beech Mountain North Carolina.

Lyman Frank Baum, born in 1856 in New York, started his career as a playwright but soon moved west with his wife, Maud Gage, to work as a newspaper reporter. It was while living in Chicago that he began writing children’s literature. The first Oz book hit the shelves in 1900 and drew on Baum’s own experiences of growing up on a farm and daydreaming extensively. His description of Kansas is based on his living in drought- and depression-ridden South Dakota.

Baum and his wife traveled extensively, and being associated with the theatre, they encountered a lot of different people, perhaps contributing to Baum’s many magical descriptions of his characters and the lands in which they lived.

Unfortunately, although Baum tried to put together a children’s film version of his book, the only one that was successful was a touring version that was aimed at adults. Baum did not live to see the soon-to-be beloved 1939 version that so many of us know today. He died in 1919, never knowing how much his stories truly meant to the public.

In 1970, a new theme park appeared at the pinnacle of Beech Mountain, North Carolina. The Land of Oz ran until 1980 and was visited by thousands of people worldwide. Designed by Charlotte native Jack Pentes, the park was built by brothers Grover, Harry, and Spencer Robbins, who built nearby Tweetsie Railroad, and was meant to increase tourism in the area during the off-season.

The park included many of the original costumes and set designs from the 1939 film, including more than 40,000 of the “gold” bricks from the yellow-brick road.

Ray Bolger (the original movie’s Scarecrow) broke ground for the park in 1968. The ribbon was cut two years later by actress Debbie Reynolds and her daughter Carrie Fisher. Reynolds helped amass a vast collection of the memorabilia used at the park, including the iconic ruby slippers. Opening day saw more than 4,000 visitors, with more than 400,000 visiting in the first year alone.

Visitors entered through the clouds to Kansas, by taking the ski lift or riding in buses from lower on the mountain. First stop: the Gale family farmhouse. Going inside, you’re subjected to the sound of the tornado flying outside the windows.

After a few minutes, everything stopped and you stepped out into a colorful world, finding yourself in Oz. After being greeted by Glinda the Good Witch and several of the Munchkins, you found yourself starring in your very own story as you started down the yellow-brick road.

And so it went, going from storybook scene to scene, traveling the road and meeting the characters in a real-life version of the story come-to-life. The witches, the castle, the Emerald City, the Scarecrow, the Tin Man, the Cowardly Lion, and the flying monkeys; they were all there. Each one faithfully recreated scenes from the movie.

The theme park was wildly successful, but the Emerald City was set on fire in 1975. The perpetrators were never found. While the fire was blazing, Dorothy’s actual movie dress was stolen. It has never been recovered. When the park reopened in 1976, it was under new management, and the new owners didn’t put much into maintaining it, even letting the yellow brick road fall into disrepair.

Oz closed for good in 1980. While the park was closed and its future unsure, several robberies stole some of the magic, by taking various props and costumes. Fans feared the Land of Oz was lost forever and relegated to the book/movie.

Although a frequent target for vandals and thieves over the years, in the 1990s, Emerald Mountain Realty took ownership of the dilapidated park and began restoring it. There were few props and costumes that survived from the original park, so it was a monumental task.

The new owners held yearly cast reunions at the park, before deciding there was enough interest to open Oz again to the public.

In the early 2000s, the park opened their Autumn Days at Oz to much acclaim. Visitors once again came from all over the world to visit. Only open in June for “A Journey With Dorothy” and on weekends in September, it is well worth the visit. You can also rent Dorothy’s house, June-October. Today, it feels like the magic is back and you can truly be transported “Somewhere Over The Rainbow.”

The Oz books were a critical and financial success for Baum and for those involved in the making of the books and early theatrical and Broadway releases. Projected sales for the first book were low but sold out quickly, necessitating several reprints.

By the time the book entered the public domain, in 1956, more than three million copies had been sold. A copy is housed with the Library of Congress and is considered by them to be “the first totally American fantasy for children.”

Continuing to keep Oz in the hearts and minds of the “young at heart,” you can typically find the original version of “The Wizard of Oz” movie, running on television throughout the Thanksgiving holiday weekend and several other times until Christmas.

Currently a freelance editor and writer, I live just steps from the Blue Ridge Parkway, in beautiful Asheville, NC, with my husband Brock and two puppies Ariel and Cassie. I love History, English, abandoned places, and ghost stories. My favorite thing to discuss all day is the R.M.S. Titanic, so expect to see me write “at least” a couple of stories about it.