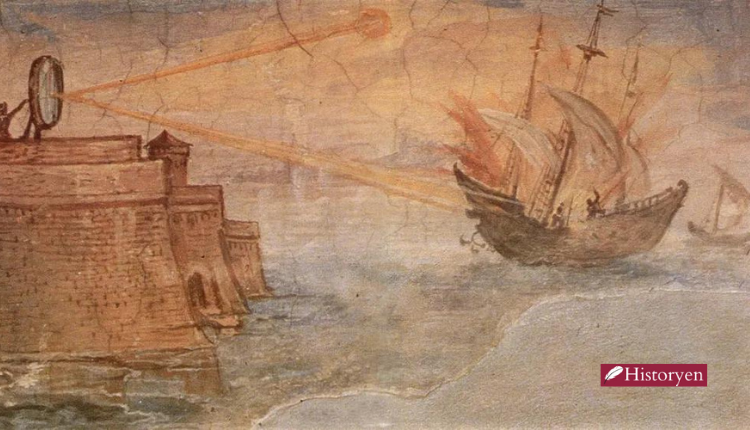 The Archimedean Heat Ray is a mirrored weapon used in the Middle Ages. Thanks to a parabolic reflector, this weapon, which could burn the ships, destroyed the enemy ships by setting the fire. Civilizations in the ancient world were always characterized by wars and political uncertainties, so they needed advanced weapons to defeat their enemies.

Archimedes, an astronomer, doctor, mathematician, engineer, and inventor, was also a gunsmith. While counting his inventions, we should definitely mention weapons. Archimedes, one of the leading scientists of classical antiquity, made discoveries such as the Archimedean Screw, which is still used today for sewage treatment and crop irrigation.

Archimedes designed powerful catapults and projectiles. These weapons were mainly tested during the Second Punic War, in 212 BC. Archimedes was killed in this battle and left behind a great legacy of weapons of war. One of Archimedes’ world-famous quotes is “Give me a lever long enough and a place to stand, and I will move the world”.

This invention of Archimedes was used to destroy ships with fire. During the Siege of Syracuse, where Archimedes died, large mirrors of polished metal were used to focus the sun’s rays on enemy ships. Thus, the enemy ships were set on fire and sunk. Some researchers have produced modern recreations of the weapon. Creating a replica, the researchers tested that the gun actually worked.

Descriptions of the heat ray appeared about 350 years after the manufacture of this weapon. To this date, there is no evidence that the heat beam was used anywhere else. Lucian, who lived between 120 – 180 AD, and Galen, 130 – 200 AD, mentioned that Archimedes used mirrors and highly polished shields to focus the sun’s rays, artificially setting the ships on fire.

Archimedes’ work on levers and pulleys was a scientific turning point that directly influenced the work of both Renaissance and Islamic scholars. A brilliant inventor and mathematician, Archimedes achieved legendary status by attracting many mythologies. We can never be sure that Archimedes made the weapons of war, but the theories are sound. Ancient texts suggest that Archimedes artificially burned ships.

Much of the speculation surrounding Archimedes is built around the core of truth. Although some of them are fictional, we can easily believe these fictions because of Archimedes’ creative mind. Some exaggerated fiction can cast a shadow over Archimedes’ work. Regardless, Archimedes’ life is filled with auras of magic and mysteries.