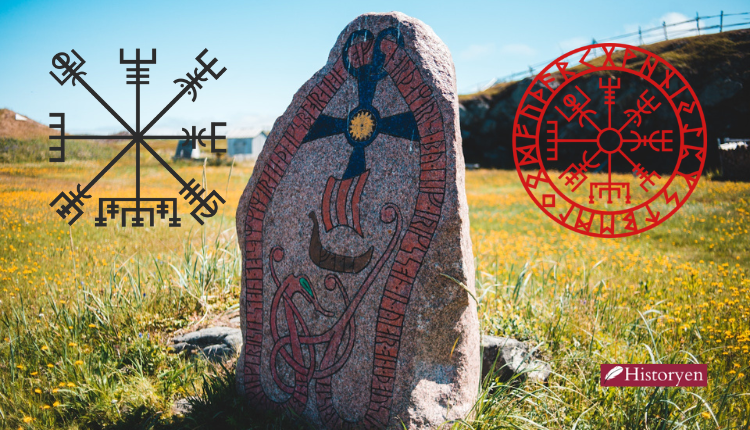 Vegvisir is an Icelandic Norse symbol thought to be a modern version of ancient Viking runic magic. Legend has it that the rune has the power to protect its wearer from being lost. The wearer of Vegvisir can always find his way home. A wayfinding symbol often referred to as the Norse or Viking Compass, the Vegvisir is more than a writing system for Scandinavians or a way of expressing how they saw the world.

The Scandinavians did not believe that the runes were created by man. Runes were natural parts of what made up the universe. Vikings believed that runes, when used correctly, had the power to turn ideas into reality. There was a belief that the runes were discovered by Odin, the god of wisdom and war. Odin hanged himself on Yggdrasil with his own spear for nine days and nights. After making this sacrifice, the secrets of the runes were revealed to him.

It is widely believed that the origin of the runes is Yggdrasil, the Tree of Life. It is Yggdrasil that connects and nourishes the nine worlds of Norse mythology. Scandinavians often write the fate of people by carving runes into the same tree.

The Viking compass, or Vegvisir, is currently used by followers of the new Viking religion Asatru. Vegvisir is now the familiar symbol of beliefs said to mean guidance in both the spiritual and physical worlds. They associate Vegvisir with their beliefs beyond being a symbol of magic.

The name Vegvisir means “leading”. Consisting of eight runic staffs, this magical symbol was created by the Vikings to aid in navigation. This symbol is carved on many ships.

The Vegvisir is also called the Norse & Viking Compass or the runic compass. Another meaning of this symbol, which is a symbol of guidance and protection, is a signpost. The symbol is associated with journeys around the world during the Viking Age (AD 793 – 1066). Vegvisir is mentioned in the Huld Manuscript compiled by Geir Vigfusson in 1880 and in Galdrabok, a spellbook.

The Huld Manuscript states that even if the person carrying the symbol does not know his destination, he will not lose his way in bad weather and storms. In Galdrabok, it is written that for Vegvisir to provide protection and guidance, blood must be taken from one’s forehead.

Although Vegvisir is associated with the Viking Age, historical findings show that Vegvisir has been used since the 17th century. Galdrabok and Vegvisir may have been derived from renaissance occultism and medieval mysticism. The Viking compass may also be a symbol associated with ancient Germanic runic culture.

Vegvisir is also mentioned in The Saga of Hrana hrrings, one of the ancient Icelandic epics. This epic, in the 1887-1888 manuscripts, mentions Vegvisir as follows:

“The weather was cloudy and stormy… The king looked around and could not see the blue sky… Then the king took Vegvisir in his hand and saw where the sun was.”

The Vegvisir symbol was highly respected by people who believed in magic, and especially by Scandinavian shamans. Along with showing the way, Vegvisir has also been accepted as a spiritual compass that guides people’s hearts and enables them to make the right decisions in life. It was also believed that the symbol could help people who had lost their confidence and faith in themselves. That is, the symbol also helped one find their way to spirituality.

The eight different staffs on the runic compass offer different types of protection against different types of obstacles and challenges. Vegisir still remains a unique and somewhat mysterious Scandinavian symbol. Although no one can determine exactly when and where it emerged, this symbol has come to the present day as a powerful symbol of great importance. People of Scandinavian descent can still be seen wearing a Vegvisir talisman or carrying a Vegvisir tattoo.