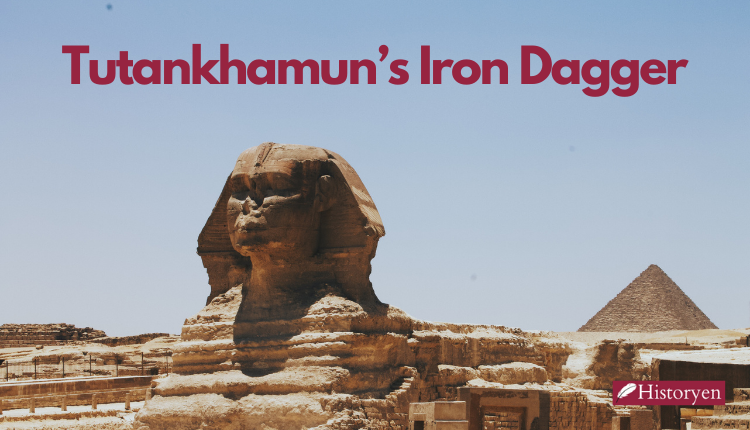 Without a doubt, Tutankhamun is one of the most interesting pharaohs in Egyptian history. There are many secrets and mysteries about his life. In addition to this, he is known as the kid pharaoh, who sits on the throne when he was around eight or nine.

Tutankhamun is one of the most popular pharaohs, who lived between 1336 and 1326 BC. He is known as the eleventh pharaoh of the eighteenth Ancient Egypt dynasty. We did not know anything about him until 1922. His intact tomb was discovered by British archaeologist Howard Carter.

Unfortunately, he could not rule a lot just like other pharaohs. He died when he was 17 years old, and he sat on the throne when he was around eight or none. Tutankhamun is famous for repairing Amun temples in Ancient Egypt. Today, we are still unsure about his death. Some researchers believe that he was assassinated, while others believe that he died because of an injury he received while hunting.

What Is Tutankhamun’s Iron Dagger?

When British archaeologist Howard Carter discovered the intact tomb of Tutankhamun, he also found many personal belongings. As you know, pharaohs are buried with their belongings so that they can take their personal goods to the afterlife. However, the iron dagger in his tomb was not familiar to crafted goods in the area.

As a result, this dagger managed to attract great attention and researchers wanted to know the source of this dagger. Thanks to today’s technology, the mystery of this iron dagger has been solved but it surprised many researchers. Tutankhamun’s iron dagger was made of meteorite iron.

How Do We Know Tutankhamun’s Iron Dagger Made of Meteoroid Iron?

The operation was carried out with the cooperation of Egyptian and Italian researchers. The results and methods used in the study were also published on Meteoritics and Planetary Science. One of the main authors of the study, Daniela Comelli noted that they found a high percentage of nickel in the iron of the dagger.

Such high nickel content is not available in any iron on our planet. In fact, this is a very common instance in meteoroids. Thus, we have concluded that Tutankhamun’s iron dagger was made of meteoroid iron. Besides nickel, a high level of cobalt also attracts attention and supports this claim.

How Can We So Sure About It Is Made of Meteoroid Iron?

Meteoroids fall to earth from time to time and we classify these meteoroids according to their content. When the same level of nickel and cobalt was searched in the database, it was found that it perfectly matches with a meteoroid that landed 240 kilometers away from Alexandria.

Considering the proximity of the lands of Ancient Egypt and Alexandria, it is highly possible that Tutankhamun’s iron dagger may be made of meteoroid iron. In fact, the entire science world and expert Egyptians already believe that this is a hundred percent truth.