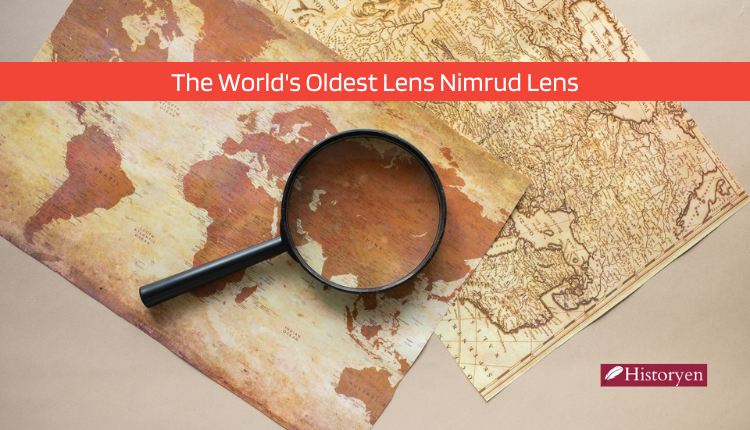 The Nimrud Lens is actually an object that looks like an ordinary piece of rock crystal. Nimrud Lens, preserved in the British Museum, measures 4.2 cm x 3.45 cm. Discovered in Iraq by archaeologist Austen Henry Layard in 1850, the lens dates back to 750 – 710 BC. Also known as the Layard Lens, it is considered by many to be the world’s oldest lens.

The nearly 3,000-year-old piece of crystal was found in the ruins of Ancient Nineveh. In ancient times, people used polished crystals to make fire. Older crystals were also found, but none were used to correct vision. The Chinese developed face-mounted lenses about 2000 years ago, but they were also used to protect against the evil eye, not to correct vision defects.

Theories surrounding the use of the Nimrud Lens include it being a lens used to start a fire by concentrating the sun’s rays, or being a magnifying lens. While the true function of the crystal piece is the subject of debate, some people believe that the magnifying glass feature is just accidental and that the piece is actually a piece of furniture.

The Nimrud Lens is made of rock crystal, also known as quartz, which has been used in lens manufacture for centuries. Quartz is a tougher object than glass, and crystal lenses are known to retain their properties and shape better over time compared to glass lenses. The Nimrud Lens was found in Assyria. The Assyrians were good glass craftsmen and wrote some of the first manuals on glassmaking around 650 BC. They had highly developed crafts and arts, craftsmen could reasonably use a magnifying glass while working.

The Nimrud Lens was a shaped piece. So it was clear that it was made for a specific purpose. Optical quality was poor, so the argument that it was made for optics is not very strong. Some defects in the crystal made the lens a poor-quality lens. The Nimrud Lens could also be an exercise or trial piece, perhaps by an apprentice. There is no evidence that the Assyrians used lenses at that time. Austen Layard had found the lens in a pile of blue glass.

The Nimrud Lens Could Be a Decoration Item

As much as we wish the Nimrud Lens were an optical lens, the evidence found points to it as a decoration piece. It is certain that the lens was meticulously shaped by someone. The craftsman may also have used the object he produced as a mini magnifying glass. However, the large number of imperfections in the master crystal suggest the idea that the crystal was used as an ornament. Spectacles began to become common after Guttenburg’s invention of the printing press in the mid-1500s. After the printing press was invented, even ordinary people began to be able to buy books. This marked the widespread need to correct vision problems with glasses. The earliest glasses were developed in the 13th century by glassmakers in Venice, Italy. The inventor of the glasses is unknown, but it is known that the lenses in the glasses are made of rock crystal or quartz. While French aristocrats were afraid to wear glasses in public, glasses were very popular in Spain because it was believed that glasses made the person look more important and noble.