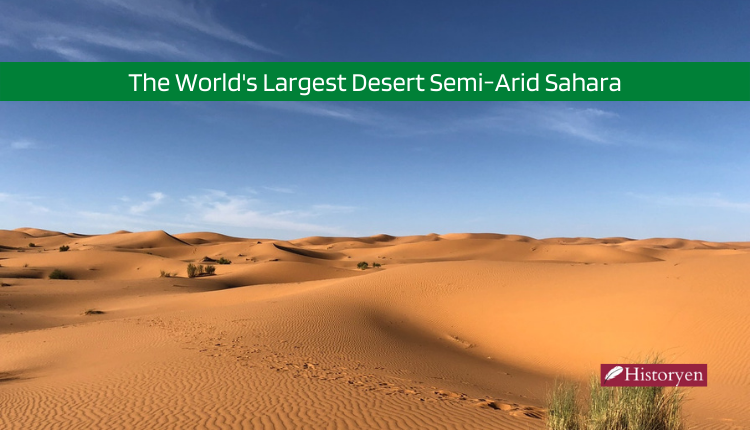 Major topographical features of the Sahara include shallow and seasonally flooded basins, large gravel areas, mountain plateaus (hammadas) and dunes. The highest point in the desert is the 3,425-meter peak of Koussi Mountain in Chad’s Tibesti Mountain.

The Sahara is located at the top of the African shield, which is made up of highly curved and exposed Precambrian rocks. Due to the stability of the shield, the later sedimentary Paleozoic formations remained horizontal and relatively unchanged.

North of the Sahara, these formations are also associated with a number of basins and depressions that stretch from the oases of western Egypt to the Chots in Algeria. The Saharan highlands, such as the Tademait Plateau in Algeria, are largely covered with angular, weathered rocks. Other notable formations include the Ennedi Plateau in Chad, the Ayr Massif in Niger, the Iforas Massif in Mali, and the tributaries of the Mauritanian Adrar region.

Sandstone and dunes cover about 25% of the surface of the Sahara.

Within the desert itself, there is an extensive network of wadis, some are seasonal remnants of systems formed in the past during wetter periods. The dunes of the Sahara store significant amounts of rainwater, which seeps and flows from various desert slopes.

The age of the Sahara was a matter of some kind of dispute. Several rock studies in the region indicate that the Sahara emerged as a climatic desert about 2 to 3 million years ago, a period stretching from the late Pliocene to the early Pleistocene. However, the discovery of 7-million-year-old dune deposits in northern Chad in 2006 suggests that the region dried up during the Miocene (24 million to 5.2 million years ago). Human activity appears to have contributed to the stability of the desert by increasing surface reflectivity and decreasing evaporation. Over the past 7,500 years, desert and coastal agriculture have apparently contributed even more to sustaining these conditions, and the Saharan climate has been relatively constant for 2,000 years.

In the 21st century, recognition that the Sahara and its southern border region, the Sahel, had crept south as a result of desertification, led to efforts to prevent this movement; most notable were the Great Green Wall of the Sahara and the Sahel Initiative. It was only in 2005 with the help of the African Union that the idea that led to an attempt to erect a “tree wall” stretching across the African continent along the Sahara coast was realized to prevent further destruction. It involved plans to plant native drought-resistant trees over an area of ​​15 kilometers from west to east of the mainland, and create a barrier to prevent the desert from moving further south.