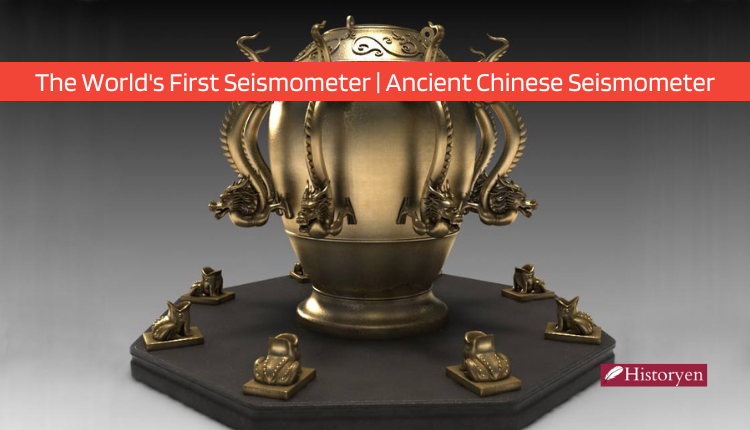 In 132 AD, Chinese astronomer Zhang Heng created a seismometer, a device that can detect the movements of the ground during an earthquake. While Heng couldn’t predict earthquakes with this seismometer, he was able to show which direction earthquakes were coming from, even if they came from hundreds of miles away. Zhang Heng was a mechanical engineer and mathematician who also built a spherical model of the heavens and a car to measure Chinese miles.

The Ancient Chinese Seismometer was the first known instrument built to detect earthquakes. There were devastating earthquakes in many parts of China, and with this device, the emperor could know where and when to send aid from the capital.

The bronze device contains eight metal dragons attached to its body, which resembles a large coffee vase. Each dragon’s head is facing a different direction, and each has a copper ball in its mouth. Dragons also have eight copper frogs under their mouths.

According to scientists, the mechanism inside the device is a kind of pendulum system that is very sensitive to vibrations. When there is an earthquake, the dragon’s mouth opens and the ball falls into the mouth of the frog below.

Zhang’s seismometer is unfortunately obsolete. But there are two copies, one on display at the Chabot Space and Science Center in Oakland, California, and the other at the Museum of Chinese History in Beijing.

Serving the empire in first-century China required much more skill than simple engineering. Potential members of the imperial secretariat were expected to be artistic and cultured. Before being called to serve Emperor An, Zhang had composed official rhapsodies about cities and laments for the governor. But Zhang’s true genius was mechanics and mathematics.

Zhang was soon promoted to the office of Chief Astronomer. The slightly better positioned Dan Song accused Zhang of trying to reform the Chinese calendar based on mathematically sound teachings. The emperor also rejected the calendar change. Then again as Chief Astronomer under Emperor Shun, Zhang was only paid in grain instead of coins or silk. Paying more than 16 kilos of grain a day was the lowest an emperor could pay directly to his own staff.

Zhang wanted to do something to show his worth. Earthquakes were a big problem in China at that time. The Han dynasty wanted to know where the earthquake was in the vast empire so that it could send its resources to the right place quickly. They thought that the earthquakes were because the gods were dissatisfied with the rule of the country and the emperor himself.

Proving it worked was as difficult as making the device. Court officials had mocked Zhang for not feeling any tremors when the device was triggered. Zhang Heng was patient, and a few days later an imperial messenger came to say that there was a major earthquake in Gansu province, about 450 km away. This province was located exactly in the direction the seismoscope was pointing. A year after this incident, Zhang was promoted to the rank of Palace Attendant and his salary rose nearly 4 times.

Zhang Heng’s inventions include the odometer and the south-pointing car. Zhang, who invented the first known odometer, used stone friction to determine mileage. The Southern Carriage was a non-magnetic compass instrument in the form of a two-wheeled chariot. The wheels and differential gears kept a wooden statuette in the shape of a Chinese president constantly pointing south. Zhang Heng reinvented this car from the model used during the Zhou Dynasty.