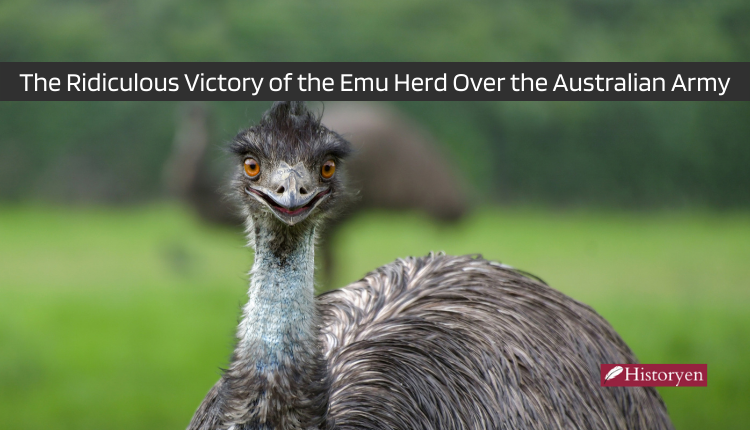 The Ridiculous Victory of the Emu Herd Over the Australian Army

Australia is a country that participated in the First World War, with brave armies and advanced weapons. However, same Australia has lost the war against the emu bird flock. Australia’s defeat by the birds in the war was an indication that gunpowder and weapons were not enough to win a war. Known as the Great Emu War, it inflicted a humiliating defeat on Australia.

The war heroes of Australia, who sent many troops to the First World War and won the war, returned to Australia after 1918. While some soldiers continued their military careers, war veterans were given some land from the Campion Region in Western Australia by the Australian government. Wheat germ aid was provided by the government to the people of Australia, particularly the Campion Region, affected by The Great Depression of 1932.

While the world was in an economic crisis, war veterans living in the Campion Region started farming. Farmers’ little irrigation while growing wheat also attracted the attention of the emu, Australia’s endemic animal. At that time, emu birds, which usually live in the outback of Australia, suddenly began to migrate to the area where the war veterans’ farms were located. More than 20,000 emu birds flocked to the farms. Emus, who ate even the planted wheat from the ground, also damaged the houses where the farmers lived.

Everyone who owned a wheat farm had suffered greatly. Farmers who used to be soldiers turned to the idea of ​​using machine guns against a herd of the emu. But by law, it was a crime to kill an emu. The farmers petitioned the then Australian Defense Minister, Sir George Pearce. Sir George Pearce sent a group of artillerymen, armed with Lewis machine guns, to the Campion area to destroy the emus that were causing serious damage to the crops. The military headquarters in Sydney asked the officer in charge of the operation for 100 emu skins to make the hats worn by the horsemen. On November 2, 1932, the war began.

Sir George Pearce believed that the war would soon end in victory. He even sent a cameraman to Campion Region to record the victory. The secretary of defense also sent Major GPW Meredith and about 10,000 munitions to lead the operation. Local newspapers were making headlines such as “The Great War Against the Emu“.

The soldiers first tried to drive the emu into a small area, and then they wanted to slaughter them en masse. On November 12, 1932, the Canberra Times headlined “300 emus killed in the first duel”. This plan would quickly triumph on paper, but in reality, it did not. Australian soldiers faced many obstacles, including rain. The rain had caused the emu herd to scatter. That’s why soldiers couldn’t target emus. Also, very fast-moving emus were difficult targets to hit.

The fact that the war did not end immediately caused the whole world to be interested in the war. This war with emus was criticized by most countries in the world. Even if the Australian army won this war, it would lose its dignity. A number of Australian MPs had asked Sir George Pearce to immediately withdraw troops from Campion Region. When the soldiers retreated, the flock of the emu was victorious.

The emu battle lost in Western Australia was one of the most embarrassing failures of the Australian military. Australia had declared a war on wildlife and had lost the war. The armies were very poor, but the emus also had very good survivability. It was their survival instincts, not their high mobility and speed, that won the war against the emu. Australia’s endemic animals, emus, still live widely in rural areas.