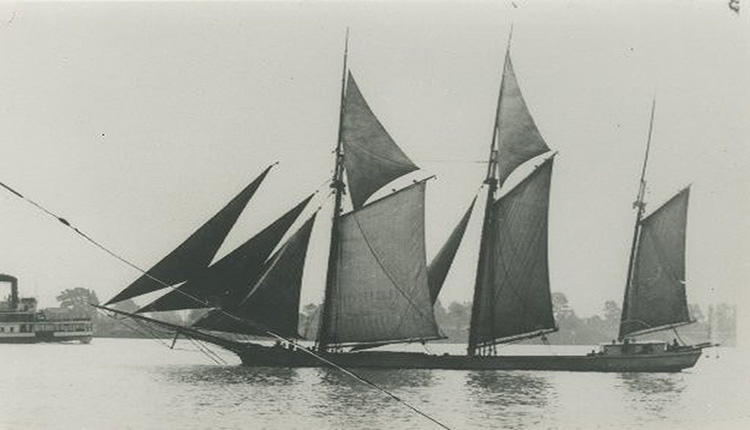 There is a region called the Great Lakes in the region connecting the North American continent to the Atlantic Ocean. This region has been used as an important water transportation corridor for centuries. The most important feature of this corridor is its severe storms. Because of these storms, an estimated 6,000 – 8,000 ships sank in the Great Lakes and approximately 30,000 people lost their lives. Many of them left traces as they sank, while others mysteriously disappeared without a trace. One of these is Thomas Hume.

When was Thomas Hume Built?

The Thomas Hume was overhauled to be able to carry timber on Lake Michigan. All the ship’s fittings were strengthened and overhauled to hold more timber. A new deck and mast were added, making the ship much stronger than before. After the renovation of Thomas Hume, he started a timber transportation business on Lake Michigan with another ship named Rouse Simmons.

How and when did Thomas Hume disappear?

The Search for Thomas Hume Begins

After Thomas Humenin did not return, Charles Hackley assigned the captain, Captain Seth Lee, to find the ship. As a result of the searches, not even a piece of the wreckage was found. Since nothing was found of the wreckage, all the crew on board the Thomas Hume were considered dead. Since the ship had no insurance, the loss was written off as a loss of 6000 dollars. Afterward, although Hackley and Hume said they would even offer a reward for information about the ship, no information came from anyone.

Many Stories Were Invented For The Mysterious Disappearance

The disappearance of the ship and the subsequent discovery of no sign of her has led to many stories. The first claim made after the disappearance of the Thomas Humen was that the ship’s crew had stolen it and used it themselves by changing the ship’s color. Another claim was that the ship was deliberately hit and sunk by a much larger ship. These are stories that are close to the truth and could have happened. Apart from these, there have also been stories of extraordinary events.

There is a region in the Atlantic Ocean called the Bermuda Triangle. It is thought that there is a magnetic area here and mysterious things are happening. One of the stories told was that Thomas Humen sailed to the Michigan Triangle, which is called the Bermuda Triangle in the area where he passed through, and it was among the rumors that he mysteriously disappeared there.

The Mystery of Thomas Hume Solved in 2006

After so many stories and mysteries, the mystery of the disappearance was solved years later by chance. Taras Lysenko, a scuba diver at A&T Recovery, was diving in Lake Michigan when, by chance, he noticed a ship lying intact at the bottom of the lake. After reporting this to the necessary places, research began on this ship. As a result of the researches, it was understood that this ship was Thomas Hume, who had disappeared years ago. The ship was standing in one of the deepest points of the lake without breaking or spoiling. Although the wreckage of the ship has been found, the fact that the ship has been standing there for years without deterioration still causes a big question mark.

The ship had sunk with many things on board. That’s why some companies took the initiative to take the items off the ship. After the necessary agreements were made, the companies started working on the ship. As a result of the work, coins, jewelry, and clothes were taken from the ship. Many of these items from 115 years ago are now on display in the museum. Although the veil of mystery on the ship has been lifted, it has not been completely lifted.