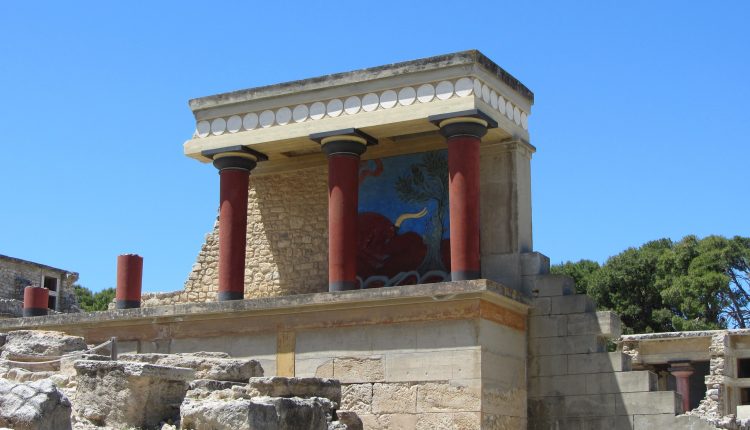 The Minoans: what they called themselves, we do not know.  Their words, carved into clay tablets and libation vessels, have never been deciphered.  Their cities have been ravaged by the relentless march of nature, warfare, and time.  Yet through the scattered pieces and broken frescoes they have left behind, we can piece together a fragmented glimpse into their remarkable world.  Today, we call them the Minoans — Europe’s first great civilization.

Who Were the Minoans?

The Minoans were a Bronze Age civilization that flourished on Crete approximately 5000 years ago.  Considered the first advanced civilization in Europe, the Minoans created elaborate multi-storied complexes commonly referred to as “palaces.”  Though, today, thoughts of palaces conjure up images of castles where queens and kings reside and hold lavish parties, Minoan palaces were quite different.

First appearing around 2000 BCE, researchers believe palace complexes on Crete were primarily administrative and religious centers where community activities took place.  It is likely they also served as important storage facilities where surplus goods were stored and distributed as needed.  It is certainly possible that high ranking officials and their families once lived in these palaces, but this was never their primary function.

Those who did live and work at complexes such as the ones at Knossos, Phaistos, Malia, and Zakros enjoyed running water that flowed through a network of clay pipes and water treatment devices, filling deep tubs and flushable toilets.  Strategically placed lightwells flooded the rooms with the brilliance of the Mediterranean sun.  Fresh air flowed freely throughout the complex, and frescoes and paintings full of color and life dazzled the senses.

Some palaces featured large courtyards probably used for religious rituals and gatherings.  It is also possible that this is where the famed bull-leaping rites were performed.  The bull was an important symbol in Minoan Crete, found throughout the palaces and portrayed in Minoan artwork.  One repeated scene seems to show young Minoans leaping over, and vaulting off of, the backs of large bulls in what most researchers believe was a kind of coming-of-age ritual.  Other scenes show priestesses and priests engaged in the pouring of libations and carrying votive offerings to the various deities of the Minoan pantheon.

Surprisingly, most Minoan palaces were not confined by walls and battlements.  There is a striking lack of protective structures around even the largest complexes.  This led some early researchers to claim that the Minoans were a shining exception in an age marked by brutal warfare.  The Minoans were largely peaceful, they believed, whose cities did not require shielding from enemies.  While it is a beautiful sentiment, today we know that the Minoans put great faith into their naval prowess.  It’s possible they saw no need to protect their palaces from foreign invaders as their navy could, and would, protect them.  But, as excavations have continued on Crete, a number of watchtowers and guardhouses have been discovered.  Weaponry is also uncovered frequently though there is much debate as to whether these were weapons meant for war or if they had more practical purposes for everyday life on Crete.  Or, it is possible, they were simply status symbols among the elite. Though it seems they did not glorify warfare, the Minoans were undoubtedly prepared to defend their island if needed.

Perhaps you’ve noticed by now that there are a lot of uncertainties concerning the Minoans and their life on Crete.  The simple truth is this — we don’t fully understand the Minoan people or how their society was structured.  We can only make inferences from the archaeological remains that have been excavated and from the contemporary accounts of other nations.  Much of this uncertainty is due to the lack of written records, or more precisely, our lack of understanding of the written records.  And that is because the Minoan written language, now called Linear A, remains undeciphered.

Linear A is a complex written language that consists of hundreds of symbols, largely believed to be syllabic representations.  It developed independently and is not connected to the earliest writing systems found in Egypt and Mesopotamia.  Though many scholars have tried to link the writing to known languages such as Mycenean Greek or Phoenician, no consensus has ever been reached.  The writing, and the language it represents, remain an unsolved mystery.

While many experts today believe that the bulk of Minoan writing is simple administrative lists and storage manifests, until Linear A is deciphered, we cannot be certain what is revealed in any of the tablets, paintings, and carvings left behind on Crete.  We can take educated guesses about how the palace complexes were used by the people, but we cannot know for certain.  We can gaze at artistic renditions of what appears to be a mighty Mother Goddess, but we cannot know her name or story.

Despite the many unanswered questions, there are a few things that we can be certain of.  We do know that throughout their history, Minoan palaces and settlements were destroyed several times (most likely due to earthquakes and fire) and rebuilt, each time on a grander scale.  We know they traded with other Bronze Age nations and, for a time, were the dominant force in the Mediterranean Sea.  Their trade routes were vast, and Minoan artifacts have been found in Cyprus, Syria, Anatolia, Egypt, Mesopotamia, and even as far as western Spain.  And we can be certain that their religion, artwork, and (possibly) language, greatly influenced the Myceneans on the Greek mainland who would one day give rise to the unparalleled Greek empire of the Classical Age.

The Downfall of Minoan Crete

Dozens of plausible theories have been set forth, but in the end, we simply do not know what eradicated the Minoan civilization.  Most likely, it was a combination of many factors.  But, like Linear A and so much of Minoan history, the final days of Crete’s powerful culture remain shrouded in mystery.  Perhaps someday, armed with new technology and a deciphered language, that will change.  Until then, we can only pick through the scattered remains of Europe’s first great civilization and try to piece together the tiniest glimpse into the incredible world of the Minoans.

Join me again next time as I explore the Minoan connection to one of the most terrifying creatures in Greek mythology – the Minotaur.