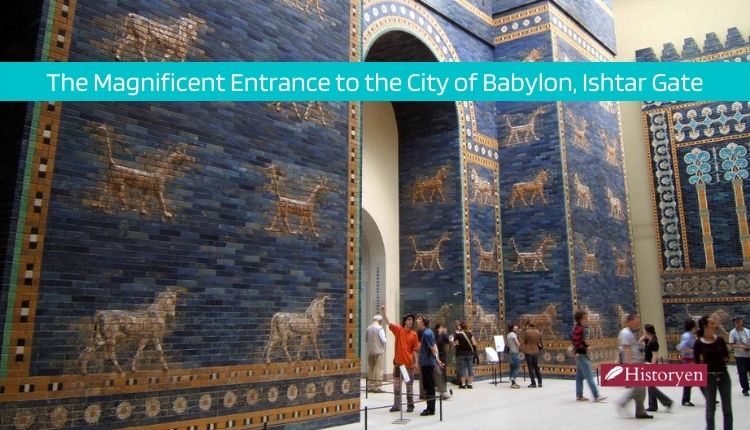 The Ishtar Gate, which includes fragments unearthed in Babylon in the early 1900s, has been reconstructed and is on display for visitors at the Pergamon Museum in Berlin. The reconstructed facade of King Nebuchadnezzar II’s throne room is also located to the left of the door. This gate, which was unearthed with the long efforts of German archaeologists, reflects the wonderful architecture of Babylon.

The stories of the Hanging Gardens and the Tower of Babel, known from thousands of sacred and historical texts, persuaded two German Oriental Association archaeologists, Walter Andrae and Robert Koldewey, to go to Babylon in March 1899. Located in what is now central Iraq, it was built in the sixth century BC. Archaeologists who sought to uncover the magnificent city built by Nebuchadnezzar eventually succeeded. The Hanging Gardens were not found, but some of Babylon’s rich architecture and magnificent works of art were. Among the wonders discovered was the majestic Ishtar Gate, adorned with fantastic depictions of beasts.

The Ishtar Gate was the main entrance to the city of Babylon. It was built between 626 and 605 BC to welcome and surprise visitors to the city. The king of Babylon, on the plaque he placed at the gate, wrote, “I have placed ferocious dragons and wild bulls at the entrance so that people will stare in astonishment. I have also adorned them with luxurious splendor.” The gate had both fine workmanship and eye-catching colors. Bulls, lions and dragons were embossed on the enamel tiles. Ishtar is the name of the Babylonian god of war, love and fertility.

Although archaeological excavations in Babylon officially began in 1899, archaeologists who had visited the city earlier found bricks and relief fragments that would later be associated with the gate. The excavations, which continued uninterruptedly for 15 years, stopped in 1914 with the start of the First World War. By the time the war began, the Ziggurat Temples (which could be described as the Tower of Babel), the Esagila dedicated to Marduk, the city’s great Processional Way, and the ruins of King Nebuchadnezzar’s Palace had been found. After the gate was discovered, it took many years to uncover the city’s intricate defensive walls.

Hundreds of boxes of fragments, which archaeologists thought belonged to the gate, were moved from Babylon to the University of Porto due to the war. After Robert Koldewey died in 1925, Walter Andrae was barely able to persuade the University of Porto to send the pieces to Berlin. As director of the Museum of the Ancient Near East, located in the Bergamon Museum, Andrae made the decision to rebuild the Ishtar Gate in 1928.

Reconstruction of the Gate

The Ishtar Gate of Babylon, which opens to the Processional Way, which is a long road through the city, was reconstructed by bringing together countless parts. Each of the pieces was meticulously cleaned and classified according to whether they were part of an animal and by color. Trying to find and try suitable pieces among hundreds of possibilities, the team aimed to restore the animal figures with real and preserved brick pieces. The reconstructed facade of Nebuchadnezzar’s throne room is adorned with palm trees, a symbol of longevity and fertility.

Walter Andrae and his team completed the reconstruction of the gate, which features reliefs of 17 dragons, 30 lions, and 26 bulls, within two years. The Ishtar Gate and the Processional Way, which began to be exhibited in the Bergama Museum in 1930, are not yet fully completed. Looking at the Ishtar Gate, we can imagine what the majestic gateway to the city of Babylon, where Nebuchadnezzar ruled, was like 2600 years ago, in 615 BC.