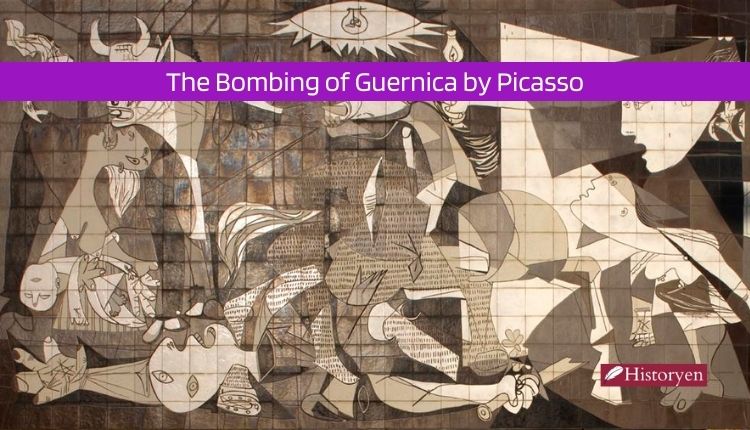 The Bombing of Guernica by Picasso

The bombing of Guernica or simply Guernica is one of the most famous works of Spanish artist Pablo Picasso. It was completed in 1937 and is considered one of the best examples of cubism and surrealism. It is a large painting on canvas, which sizes are about 350 cm x 775 cm. This great masterpiece is also regarded as one of the best anti-war paintings in the world. Picasso did not use any colors apart from black and white in his work. Although the limited number of colors on the painting, it is a quite powerful depiction of the Guernica bombing.

Creation of Bombing of Guernica

One of the interesting facts about Bombing of Guernica is it is made of matte house paint. Picasso formulated the mixture and avoided using any gloss. Unlike what most people believe, Picasso did not create this masterpiece on his own. He received assistance from American artist John Ferren and photographer Dora Maar. Another interesting fact about Bombing of Guernica is Picasso worked on the painting only for 35 days. This is a relatively short period when compared to the fame of this masterpiece. Most experts also believe it is one of the best works of the master artist.

The Bombing of Guernica Composition

At first glance, the Bombing of Guernica can look quite complex. Picasso managed to reflect the chaos and violence caused by the bombing very well in this painting. This painting represents the darkness and death brought by the Nazi government to the Spanish town. In addition to the obvious figures and depictions, there are also some hidden images in the painting. For instance, there is a skull overlaying the body of the horse. Moreover, most of the images also form other images such as the tail of the bull also serves as a flame image where smoke is rising. You can find more hidden details like this as you keep staring at the painting more.

Importance of The Painted Hall Greenwich