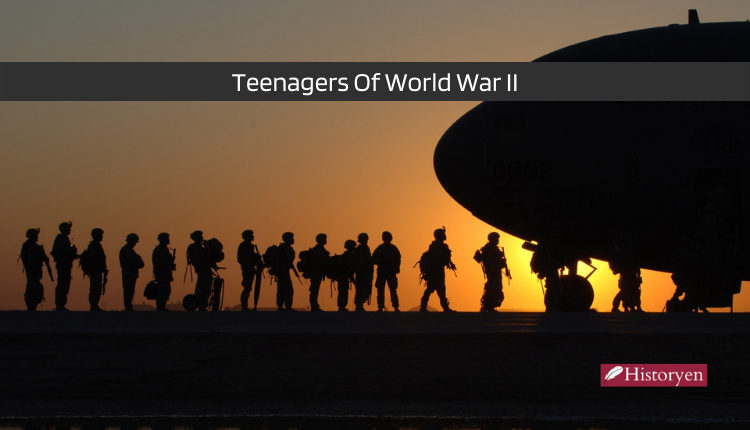 The Second World War created a period of great upheaval for children and youth all over the world. Every country that entered the war took the youth from the cities and took them to the middle of the war, to the fronts. Most of the teenagers were made soldiers, some worked as medics, and some as transporters. They could not constantly hear from the families they left behind, so they did not know whether they were injured, bombed, or left homeless. Teenagers were living their lives by taking gas attacks and air attack measures. There were great famines both during and after the war, leaving lasting effects on the lives of everyone, child or young, during the war.

12 years had passed since the First World War, and Europe was living in peace, but the danger of Nazism was growing. Against this danger, many countries began to prepare for the possibility of war. Various countries distributed gas masks to citizens and took air raid measures. The 1938 Munich Crisis had really brought countries closer to the idea of ​​war.

Fascism was one of the great humanitarian problems of the Second World War. In Spain, there was Nino fascism, and there was Nazi persecution of the Jews. 10,000 Jewish children in Austria, Germany, and Czechoslovakia were sent to England by Kindertransport. Just before the war began, many countries had begun to evacuate children from the cities to the countryside. The children lived in villages for months and were estranged from their families. These evacuations were made by countries where airstrikes were expected in city centers. Many children were sent to countries such as New Zealand, North America, Australia, and South Africa.

Meanwhile, the young people were in the middle of the war. After France fell in the summer of 1940, it was time for the British invasion. Millions of young people under the age of 30 were fighting against each other without knowing each other. Some teenagers were protecting villages and towns. Trying to help defend against enemy invasion, the youth was trying to stop the enemies with weapons in their hands.

In the Autumn of 1940, the German air force bombarded British cities, especially London, for 2 months without stopping. More than 15,000 children died in these attacks. Teenagers who were fighting or aiding during the attacks did not even know that they had lost their siblings. Young people on the defensive line have served as fire watchdogs, messenger, airstrike countermeasures services, and civil defense aides. Many teenagers were killed doing these duties.

Countries participating in WW2 had to deal with shortages of clothing and food from 1940 onwards. Since the countries could not produce enough for themselves, they did not export their products. Children and young people joined the vegetable growers. Clothing exchanges were established so that children and teenagers could exchange clothes with each other. Thus, children and young people who continued to grow could buy and wear the clothes of people older than themselves.

The war disrupted the education of children and teenagers who were eager to receive an education. Thousands of school buildings around the world were put under government control for use in the war. Class participation was very low due to the fact that young people were at war and children were evacuated. One in five schools in Europe was damaged by the bombing. Still, schools and teachers continued to teach students, trying their best. Paper, number of teachers, books and course equipment were very inadequate. All men over the age of 18 had entered the war by obtaining the armed forces calling papers for war. Those aged 16 to 18 must have been enrolled in national service. Children between the ages of 14 and 17 were employed in jobs such as shipbuilding, technicians, agriculture, office clerk, aircraft production, and vehicle production.