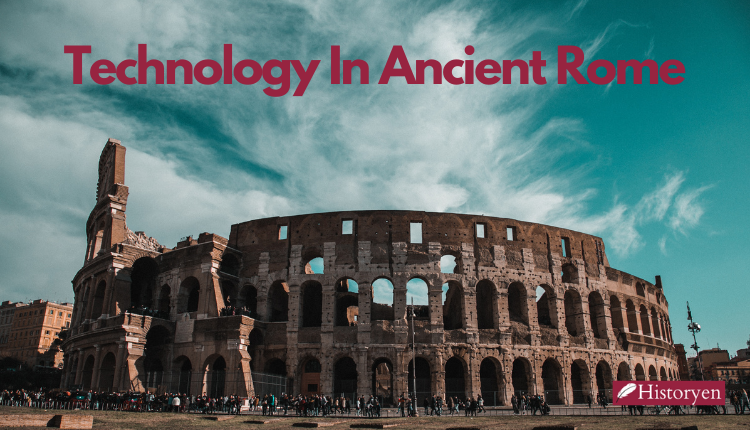 If someone would ask you to name the top three mightiest empires in mankind’s history, Ancient Rome will be one of the answers of many people. Without a doubt, this mighty empire was ahead of its time. We owe many things and technologies we use these days to them.

The empire supported every innovation and managed to build many monuments that are still standing today. So, this is why we wanted to compile an article about the technology in Rome for our visitors. Here is some amazing information that will change your perception of Ancient Rome.

Although Ancient Rome has numerous technologies, we wanted to compile only the most important ones with you under this heading. Only the following five technologies are great proof of why and how Ancient Rome ruled for centuries.

So, let’s check these Ancient Rome technologies together one by one.

Rome Used to Have Better Roads than Most Modern Countries Today

Believe it or not but Ancient Romans built roads that are way better than most modern countries are building today. Some of these roads even challenged the time and they are still functional.

You probably heard the saying “All Roads Lead to Rome”. People have rightful proof to say this. The total length of the roads passing through the capital of Ancient Rome is estimated to be around 50,000 miles. Considering that they were built more than 2,000 years ago, this is a great success.

Clean water was one of the major problems for the growth of the cities. Without a doubt, it is one of the most important developments or technologies to build larger cities, which attract more philosophers or scientists. Ancient Romans used aqueducts to bring running water right into the city centers.

In fact, some nobles and elites always had running water in their mansions. The length of some of these aqueducts could reach 60 miles. They crafted stone walls to place pipes, dug tunnels in mountains to bring clean water to their cities.

Did you know that the average lifetime of Roman soldiers was longer than regular citizens in the cities? Believe it or not, this is a well-known fact. It is a huge surprise when we consider the number of battles that Ancient Rome took part in.

However, thanks to battlefield medicine technology, the empire managed to keep its soldiers alive and let them serve longer. They used to have field surgeons, who constantly stayed with the army.

Engineering Was Ahead of Its Time

Arches are one of the most important buildings of ancient times. In fact, they used to exist centuries before Ancient Rome was founded. However, this empire managed to understand its structure and developed the concept. As a result, they managed to build better and bigger structures.

Thanks to these simple and widespread structures, Ancient Roman could build longer and wider bridges, aqueducts, and even colosseums. Today, even the arches in Pompeii are still standing despite numerous disasters and thousands of years.

Of course, another great technology of Ancient Rome is the concrete they used to build. Unlike today’s formula, Ancient Rome engineers used volcanic rock and lime mixture to create smooth, great-looking, and highly durable concrete blocks.

The best part of this concrete mixture was it was flexible enough to pour it into molds. In this way, Ancient Romans had the flexibility they needed to build aesthetic buildings. Once it was cold, it used to become one of the most durable blocks in ancient times, which is a great indicator of the advancement of Ancient Rome technology.