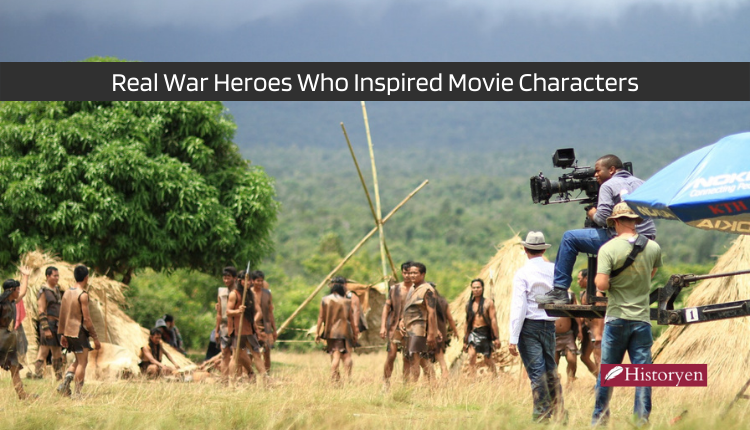 Many movies have been made about wars in the world. Some movies featured iconic acting and real-life stories that will never be forgotten. Although we do not have certain information about whether the script is based on reality in some films, some of them are made into scenarios by adapting real-world characters. Of course, every movie also contains many fictional scenarios.

In this list, we will talk about some real war heroes who inspired movie characters. We will see together what they were doing, who played them in the movies.

There are dozens of good movies that cover incidents in World War II. Midway is one of those movies. Based on the true story of the Battle of Midway, this movie covers nearly six months of the war, starting with the attack on Pearl Harbor. The Japanese attack on Pearl Harbor should have been covered when making a movie about the Battle of Midway. Lieutenant Richard “Dick” Best, played by Ed Skrein, was both an important hero in the war and the lead role in the movie. Midway Island, located halfway between the United States and Japan on the map, made it an optimal strategic location.

On June 4-7, 1942, the American forces dealt a decisive blow to the Japanese fleet with naval and air warfare. Lieutenant Dick Best was an American fighter pilot. Dick Best had sunk Hiryu and Akagi, two of the four Japanese aircraft carriers sunk during the Battle of Midway. Despite facing attacks from both Japanese warplanes and anti-aircraft guns, he did his job well. Dick Best was only able to fight for 1 day in this war. Best, who inhaled caustic soda from a faulty oxygen cylinder, was treated for 32 months. He never flew again after June 4th.

Schindler’s List is a film about how a German businessman named Oskar Schindler employs Jewish workers in a factory he founded in Poland during World War II, thereby ensuring that 1100 Jews stay on the line. This film, which is among Spielberg’s most important works, also won him an Oscar. The film, which was nominated for 12 Oscars in 1994, won 7 awards. Liam Neeson played Oskar Schindler in the movie.

The film, which is about a paratrooper named William H. Pitsenbarger, tells the Battle of Xa Cam My on April 11-12, 1966. Paratrooper Pitsenbarger had performed more than 250 rescue missions during the Vietnam War. Pitsenbarger was someone who had crossed the border 5-6 times to rescue wounded soldiers. It is known that he was wounded at least twice and fought until he could no longer fight. When he was unable to fight, he continued to instruct his fellow soldiers. He hid it by placing two bodies on a wounded soldier named Fred Navarro. Navarro watched the shooting of Pitsenbarger from under the bodies. British actor Jeremy Irvine plays Pitsenbarger in the movie.

While this isn’t a movie, it’s a video game. Released in November of 2021, Call of Duty Vanguard is set during the Second World War. Each of the game’s four main characters is inspired by real war heroes. Russian sniper Lyudmila Pavlichenko, who killed more than 300 Germans in World War II, appears in the game as Polina Petrova. American pilot Vernon Larsen Micheel, who bombed two Japanese aircraft carriers on the same day, has the name Wade Jackson in the game.