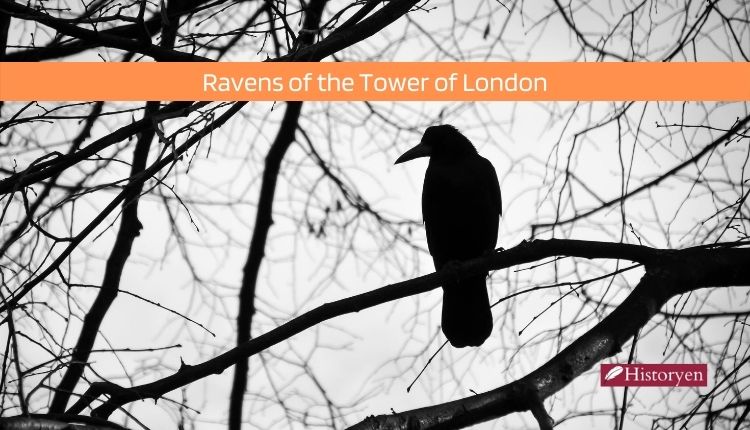 There are always 7 ravens in the Tower of London. 6 of them stay in the tower to protect the crown and one acts as a support for them. If the tower’s ravens fly away or disappear, England and the Crown will fall with them. While this is a myth, it is certain that the royals take this myth very seriously.

It is alleged that after Lady Jane Gray’s execution in the Tower, ravens ripped off the dead queen’s eyes. Another claim is that a witch told King Charles II that the Monarchy would fall if the ravens left the Tower. King II. Charles reigned from 1660 to 1685. Charles also refused to drive the ravens away from the Tower, despite the request of his friend John Flamsteed, who was the Tower’s observatory. Flamsteed complained that the ravens were blocking his telescope’s view, but Charles did nothing against them, fearing that destroying the ravens would be a bad omen.

The official Tower of London Historian said that in the aftermath of World War II, the two surviving ravens, Mabel and Grip, disappeared from the Tower. Although the tower remains without a raven, the monarchy continues in England. During WWII, ravens were used in the Blitz as lookouts for planes and bombs.

The tradition of feeding ravens continues in the tower. A Ravenmaster named Chris Skaife looks after the ravens in the tower. Ravens with their wings clipped so they stay behind the tower walls. Ravens are loved and visited by the public, just like members of the Royal family. Ravens live in the Royal Palace and receive service from servants. Ravens are fed blood-soaked sweet biscuits, rabbit meat from Smithfield Meat Market, fresh fruit, cheese, and vitamins. They eat one egg a week. They do not eat the food dropped by the tourists visiting the Tower, but they pick it up from the ground and throw it away.

Ravens, which have different colored bands around their legs, are easily distinguished from other ravens. Every raven is considered a member of the Royal family. Therefore, ravens with behaviors that are not suitable for royalty can be dismissed. Raven George, who damaged the roof of the tower, attacked the TV antennas, and snapped the cables, was terminated. George was exiled to Wales for his crime. Another raven, Grog, also managed to escape from the Tower and, after 21 years of serving the Crown, moved to live in a London bar called Rose and Punchbowl. In 1896, two of the ravens went first to St Paul’s dome, then never returned. In 1995, Charlie the raven was killed by a police dog.

A breeding program for ravens has been run since 1987. A total of 17 baby ravens were born from the mating of Rhys and Charlie. Founded by William in 1066 and modified and enlarged by subsequent monarchs, the Tower of London is the most famous tower in the world. Throughout its 950-year history, it has been used as a jewelry house, arsenal, execution place, prison, mint and zoo. Ravens are among the important symbols of British Royal history, monarchy and tradition. You should definitely see one of the ravens on a trip to the Tower of London.