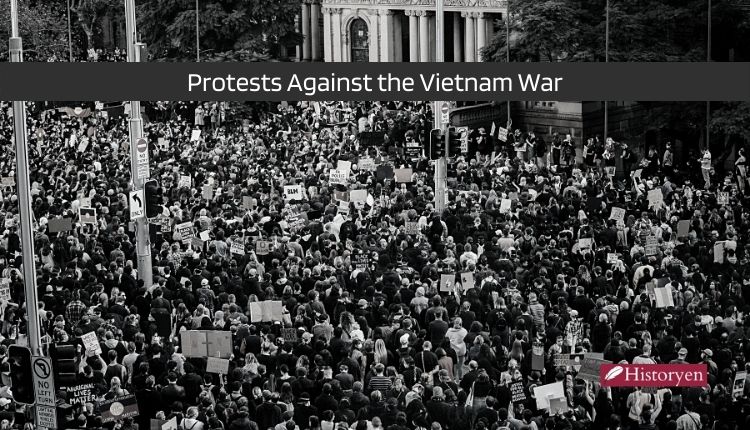 Protests Against the Vietnam War

The Vietnam War was one of the disasters brought on by the Cold War era between the Soviet Union and the United States. US leaders launched this war for the global containment of communist expansion and for national interests. The USA wanted no Soviet proxy states anywhere in the world. The United States and Vietnam fought to reunite South and North Vietnam.

Divided into South and North Vietnam, the country had decided to pursue a strategy that would result in its unification under the North Vietnamese president, Ho Chi Minh. The United States sent U.S. troops to South Vietnam to prevent this. At the time of the assassination of US President John F. Kennedy in 1963, the number of US military forces in Vietnam was less than 15,000. Under President Lyndon Johnson, the number of soldiers increased to over 500,000 in 3 years. The Vietnam War was the first war to be broadcast live on television. Every night there were reports of casualties on television.

On January 30, 1968, the North Vietnamese army invaded the South Vietnamese capital, Sayon, launching a daring attack on the US Embassy. This attack was the ignition of the war that would continue for years. Lyndon Johnson, who lifted the military deferral of students in January 1966, sparked an anti-war movement. The Students for a Democratic Society held anti-war protests such as “We’re not going to hell.” Inverted American flags were frequently used in protest marches.

On April 4, 1967, Dr. Martin Luther King Jr made a sweeping anti-war statement. Addressing an audience of more than 3,000 people at Riverside Church in the New York City, King interpreted the war as “taking young black men crippled by our society and sending them 8,000 miles away into battle.” Two weeks after this speech, thousands of demonstrators led an anti-war march to the United Nations under King’s leadership.

On the other hand, a leaked copy of the US Pentagon Documents had emerged. It appeared in the documents that the government had persistently misled the American people about the war. In 1969, a court overturned the conviction of a young African-American man who allegedly made threatening comments against President Johnson as part of an anti-war protest. The protests managed to damage the course of the war and the trust in the rulers of the country, and changed the course of many things.