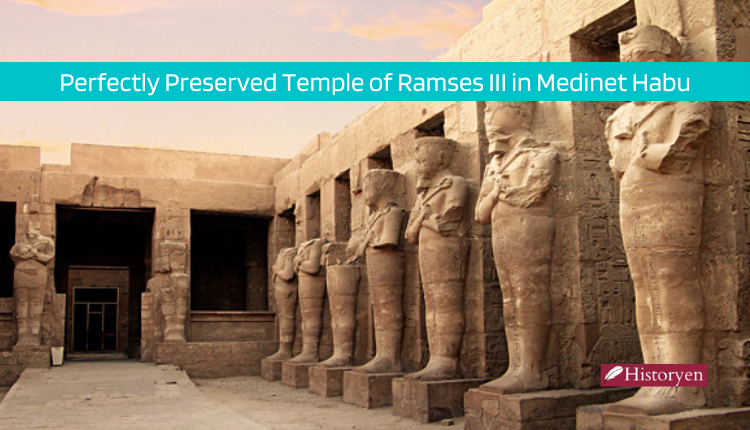 Both Hatshepsut and Tuthmosis III built a temple here dedicated to Amun and later Ramesses III built his largest memorial temple on the site.

The entire temple complex was surrounded by a massive fortified wall, with an unusual gate at the eastern entrance, known as the pavilion gate. Ramesses III, a military man, probably saw virtue in such a structure.

In later times, because of its fortresses, it was the refuge during the civil war between the high priest of Amun in Karnak and the viceroy of Kush. During the Twenty-Fifth Dynasty (700 BCE), the women of Amun were worshiped in chapels called the divine worshipers of Amun.

The outer walls were decorated with religious scenes and portraits of Ramesses III’s wars against the Libyans and sailors. The first pylon shows how the king wounded his enemies and also has a list of conquered lands. The interior walls also have a large number of well-preserved bas-reliefs, some of which still have their original paint.

Medinet Habu, the morgue of Ramesses III is opposite Luxor as part of the Medinet Habu necropolis.

Built as a million-year-old house, the cult building was used privately to worship the divine pharaoh. In addition to the main temple, the temple complex also contains other monuments: a temple to Amun, tombs for the women of Amun, and the sacred lake.

“Porta Alta” is the main entrance, the well-preserved reliefs on the walls show the fall of the enemies of the pharaoh. The rooms above the main gate were used by Ramesses III himself.

The corridor to the morgue temple cemetery within the surrounding wall is framed by two tower-shaped buildings, in the corridor itself are two statues of the goddess Sachmet.

The palace joined the royal morgue and served as the abode for both this world and the afterlife.

In the mortuary temple of Ramses III, the first pylon has monumental dimensions (63 meters wide and 20 meters high).

The first courtyard is surrounded on the right by pillars of Osiris, on the left a colonnade defines the temple and the cult palace behind it. The second pylon, slightly smaller, is followed by the second courtyard. It is symmetrical and smaller.

The corridors and backyards are dominated by eight columns of Osiris. The last part of the morgue is the site of the Blessed Sacrament, surrounded by previously covered rooms. Two groups of pink granite statues mark the site.

Special about the mortuary temple of Medinet Habu are the many reliefs, where the previous painting can still be seen.

Excavations around the temple at Medinet Habu, near Luxor, have uncovered an entire city from the Pharaonic era.

The Temple of Ramesses III at Medinet Habu was the last of the great funerary structures built in Western Thebes. It is currently the best-preserved monument in the West Bank.

When the building was erected, the pharaoh based it on his predecessor – Ramesses II the Great and his Ramesseum. The Temple of Ramesses III was built on the southern boundary of Necropolis, near the sacred site on the hill of Thebes. It was there, according to tradition, that Amun appeared and rested the so-called Hermopolitan Ogdoad, a group of eight gods who participate in the creative action of the world.

It is richly decorated and is a unique type of architecture in Egypt. It is modeled at the entrance to the Middle Eastern gatehouse known as a migdol or migdal. The Gate of Thebes, however, had a living character and, together with the side wings, formed part of a representative palace. The ruler lived there during the festivals that took place in western Thebes.

Medinet Habu is characterized by the best-preserved temple palace of Thebes and the beautiful decorations of the first pillar and courtyard. The reliefs show the victory of Ramesses III. Inside the palace, on the north wall, is the performance window where the king sat during religious ceremonies.

The decoration of the second courtyard was devoted to the celebration of festivals in honor of Min (God of Autumn) and Sokaris (the ruler of the state of the dead), as well as the feast of the beautiful valley. To make way for the construction of the church, they destroyed statues and forged crosses on the temple walls.