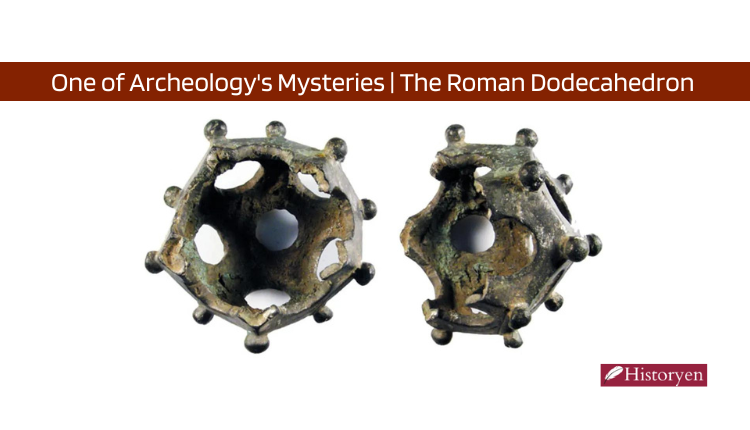 The Roman dodecahedron is a small, hollow object of a geometric shape with 12 flat faces, made of stone or bronze. In this way, each facet of which is pentagon, each corner point of the pentagons is decorated with a knob. Pentagons often contain circular holes in them. Researchers have been unable to understand the origin and function of this mysterious object for 300 years.

The first dodecahedron was discovered in the English countryside in Aston, Hertfordshire in 1739 by a local historian. Each object discovered later was different in structure and size.

The Roman dodecahedra is an object from the 2nd or 3rd centuries AD. Typically ranging in size from 4 cm to 11 cm, this object has been found in Switzerland, the Netherlands, France, Belgium, Great Britain, Germany, Luxembourg, Austria and Hungary. There are more than 100 examples of the work found. The specimen found in Geneva was made of silver. The dodecahedron, found in Idaean Cave, Crete, is made of rock crystal and has Greek characters instead of holes on its twelve faces.

What Was the Roman Dodecahedra Used For?

Roman dodecahedra, what does it do and how does it work? There are no documents or notes related to these mysterious objects, so the function of the dodecahedra is still not determined. However, many speculations and theories have been put forward. In one instance, the dodecahedra had a candle next to it, causing controversy over whether it was a candlestick.

A toy for throwing and catching on a stick, gauges for calibrating water pipes, surveying instruments, dice, devices for determining the optimal planting date for winter grain, scepter ornaments, geometric sculptures are theories for the function of the dodecahedra. Some of these theories are important.

A recent hypothesis for Dodecahedra’s purpose is that they were used as knitting tools to make gloves. The most accepted theory is that the Roman dodecahedron was used as a range measuring device on a battlefield. This might explain the different sized holes in the pentagrams. However, it has not been fully elucidated how the dodecahedron might be used for these purposes.

One theory claims that dodecahedra are religious relics that were once used as sacred tools for Caledonian and British druids. There is no archaeological evidence or written record to support this view.

Another discovery adds to the mystery about the function of these objects. The Roman icosahedron, a 20-sided polyhedron, was found by Benno Artmann. This discovery led to the question of whether there were many other geometric artifacts of different types, such as hexagons and octagons, that had not yet been found in the Roman Empire. Despite the many unanswered questions, Roman dodecahedrons were invaluable to their owners. Many of these objects were found among treasures along with coins and other valuables. Perhaps the true purpose of the Roman dodecahedra will never be known, but progress in archeology may reveal more clues to help unravel this mystery.

Ancient Roman civilization contains many secrets that even a lifetime of study cannot reveal to us. The object was not mentioned in Roman texts, and although the design of most objects was decorated with patterns, none contained numbers or letters to hint at their use.