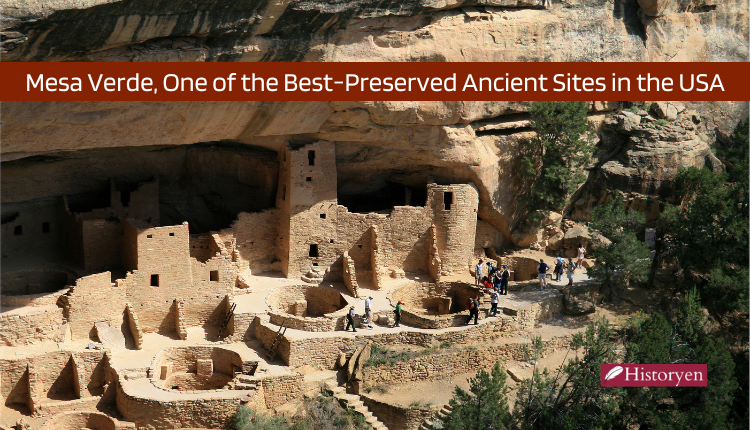 Mesa Verde National Park, a national park in southwestern Colorado, USA, established in 1906 to preserve remarkable prehistoric stone dwellings; it was declared a World Heritage Site in 1978. Most impressive are the multi-storey apartments built under unique cliffs.

The park occupies part of a large sandstone plateau that rises to more than 2650 meters above sea level and slightly to the southern slope. Water erosion has formed niches of various sizes in the sandstone of these canyon walls (where the stone dwellings are located). Elk are the most common large animals, and there are some bears and cougars and many smaller mammals in the park. Snakes and lizards are also plentiful, as are birds.

Around 550 AD, The Basketmaker people, direct ancestors of the ancestral Pueblo (Anasazi) people of the region, moved to the Mesa Verde area. There was usually enough rain for their crops, and fountains and sinkholes provided drinking water. The construction of shallow dwellings, consisting of houses with vertical walls and flat roofs, all joined in long rows, began around AD 750; archaeologists call it the Pueblo I period. Sandstone became more common in residential construction and one or more underground pits (kivas), probably used for ceremonial purposes, were dug for these mansions.

The highest cliff in the park is Cliff Palace, which housed up to 250 people in its 217 rooms and 23 kivas. Casa Longa, the second largest residence on the cliff, has 150 rooms and 21 kivas, which housed about 150 people. Mesa Verde’s population probably peaked at about 5,000 people.

In 1300, after the great drought (1276-1299), most people left Mesa Verde and moved south, according to archaeological evidence, to what is now New Mexico and Arizona. These people belong to the ancestors of the current Pueblo Indians.

Today, the park protects about 5,000 known archaeological sites, including 600 stone dwellings. These sites are among the most notable and best preserved in the United States.

Mesa Verde was “discovered” in 1800 and established as a national park by President Theodore Roosevelt on June 29, 1906. For over 700 years, they and their descendants have lived and thrived here, gradually building extensive rock deposits in the sheltered niches in the canyon walls. Then, in the late 13th century AD, in a generation or two, they left their homes and moved. Mesa Verde National Park preserves a spectacular memory of this culture.

Mesa Verde’s main park road is open 24 hours, although activities and services in the park are usually limited to daytime.

Kivas have been used by many Puebloans for religious rituals and other ceremonies. The kivas in Mesa Verde are mostly circular and underground chambers, although some kivas are built above ground while others are architecturally different.

Mesa Verde, Spanish for “green table,” gets its name from the relatively lush canopy of pine and juniper forests. The table’s above-average elevation (6100-8675 feet above sea level), reliable rainfall (16.6 inches per year), fertile clay soil, gentle slope to the south, and the many associated drains and top water made it excellent for corn farmers.

The earliest established construction date for a small farming village in Mesa Verde (i.e., Mesa Verde National Park, as opposed to the much more extensive Mesa Verde region) is around 580-90 AD. Settlements and population increased rapidly over the next two centuries, so the estimated population for the entire table is 750 people between 725 and 800 AD.

Mesa Verde itself and much of the area north of the San Juan River lost a large number of people in the 10th century, and the causes and extent of this depopulation are debated. Chaco-era Great House communities such as the fortress-like Far View complex have evolved on the plateau, but researchers are still unsure of the extent to which humans in the Mesa Verde region are connected to the plateau. Chaco Canyon, the great cultural center for 70 years.