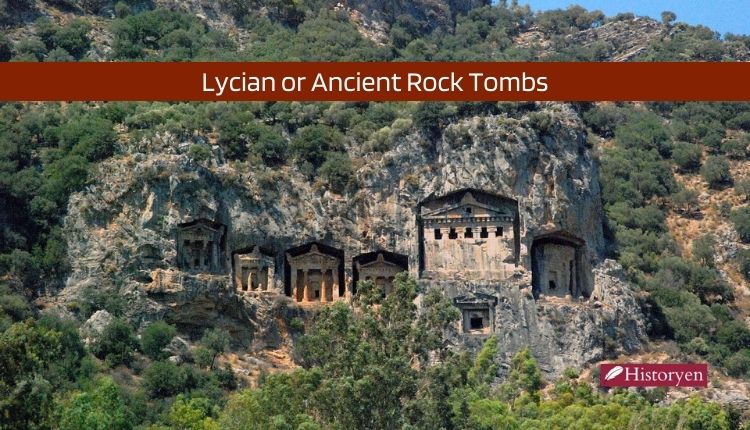 Lycian rock tombs, which are generally known as ancient rock tombs are one of the ancient beauties, which you can visit today. This amazing masterpiece is located in Fethiye, Turkey, and consists of numerous temples. The combination of all these rooms and temples makes up the Ancient Rock Tombs. Today, the region attracts thousands of visitors. It was built during the 4th century and unlike most of the other settlements in the area, this one was carved into the cliff face. You can also enjoy a spectacular sight of modern Fethiye during your visit to the area.

In Lycian culture, it was believed that people were carried to the afterlife by holy creatures after they pass away. These creatures are very similar to angels in today’s popular religions. Since dead people are carried to the afterlife, Lycians used to place their bodies in high places to honor their dead. In this respect, Ancient Rock Tombs is one of the best examples that managed to survive until today. These tombs are curved rooms on the cliff face. In addition to these, separate rooms, there are also temples built on the cliff to perform rituals. Unfortunately, no evidence managed to survive due to looting throughout history.

Other Details About Ancient Rock Tombs

Just like most of the ancient structures in Turkey, Ancient Rock Tombs are protected by the Turkish government. You can view the area from the road but if you would like to get closer, you need to buy a ticket or hire a guide. You can even visit the tomb of Amyntas, which is the most popular tomb in the area. In addition to this, you can easily reach the area on foot. However, you may need to be fit since you are going to walk uphill. Besides the walkway, you can prefer the stairs which will take you to King’s Garden Restaurant.

Importance of The Painted Hall Greenwich