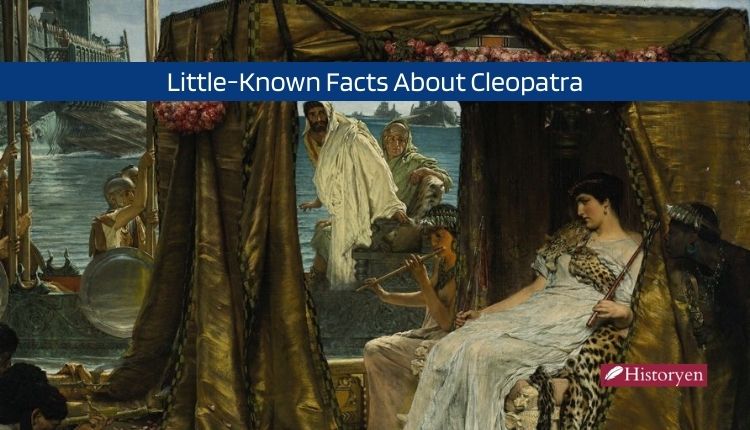 Cleopatra is one of the most powerful women figures in history and today, we are going to share little-known facts about her. If you would like to learn more about this powerful woman, who is regarded as the Queen of the Nile, then this article is for you!

In the following sections, you are going to learn ten facts about her, which we assure you will surprise you a lot! So, let’s stop wasting time and check these facts one by one together.

Although most people believe, Cleopatra might not die because of venom. Many people believe that she was bitten, but this could never be proven. In addition to this, it is a known fact that she always carried venom in her hair.

The Cleopatra Movie Was the Most Expensive Movie

In 1963, a movie named Cleopatra was filmed. The original budget for the production was $2 million. However, this budget increased up to $44 million. The studio was almost bankrupted during the filming, but the movie managed to make a fortune at the box office too.

Cleopatra Led a Fleet in Battle

In 32 BC, a Roman senator declared war against Cleopatra. A year later a famous naval battle called Actium took place. In this battle, Cleopatra led dozens of Egyptian ships against the Roman senator.

Cleopatra and Her Lover Had Drinking Club

Roman General Mark Anthony and Cleopatra were married, and they had three children from their marriage. The couple also had to flee to Egypt after the Actium battle. What makes this couple special is they got on very well. In fact, they had their own drinking club.

She Was in Rome When Caesar Was Assassinated

Did you know that Cleopatra was in the city when Caesar was assassinated? In fact, she had to flee the city after this event. However, her exotic look is always remembered by elites in the city. Many women tried to look like Cleopatra in those times.

She Knew How to Make Entrances

Cleopatra always believed that she was one of the living goddesses. In fact, this is true since Egyptians used to believe that their rulers are gods or goddesses. However, Cleopatra paid extra attention to her entrances to amaze everyone.

Cleopatra Was Involved In the Death of Her 3 Siblings

Cleopatra Was One of the Most Intelligent People of Her Time

Although we often hear stories about her beauty, she was quite intelligent as well. In addition to this, she used to know how to use her feminine side. This is her biggest power and advantage. She managed to do much more than any Egyptian ruler in her lifetime.

She Was the Fruit of Incest Relationship

In ancient times, royal families used to have incest relationships to keep their bloodline pure. Cleopatra’s family was not different either. Although her parents are known, it is believed that they are brothers or sisters.

Cleopatra Was Not an Egyptian

Probably, this is one of the most known facts about Cleopatra and you may be wondering whether it is true or not. However, it is completely true. Although she was born in Egypt, her ancestors arrived in Egypt from Europe. It is believed that her ancestors are Macedonian Greece. However, Cleopatra did her best to practice and adopt all the customs of Egypt and became one of the best rulers in history.