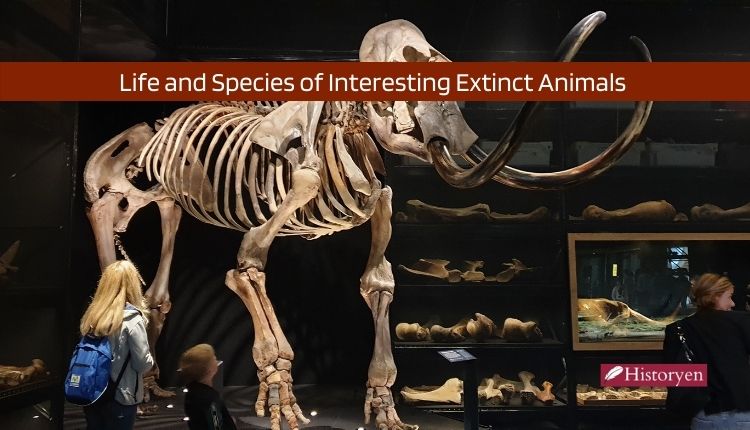 Since the existence of the universe, humans, and animals have lived together through various evolutions. Apart from the known ones, we can say that there are hundreds of interesting extinct animals. Perhaps you have never heard of these animals or even seen their pictures. Studies conducted in recent years show that the number of extinct animals is steadily increasing. In order for the natural food chain not to be disrupted, humanity needs to take action in no time and protect endangered animals. We should not forget that one day without conscious conservation efforts, not only animal species, but also natural life may perish. Even the smallest creature found in nature has the right to live, and no one should interfere with the right to life of any creature.

Animals are one of the important creatures that exist in the world. Animals also have a very important place in the world for natural balance. There are various benefits that each animal species adds to this world separately. They are very important for the natural balance of nature. But over time, nature is changing, climates are changing. Unfortunately, this change is taking place in a negative direction. Animals are also affected by this negative. These changes that occur in nature and in the climate, that is, in the world, especially negatively affect the future of some animal species.

Some of the interesting extinct animals listed below are still alive today, but are about to become extinct in a few years. Others went extinct thousands or even millions of years ago.

You may have heard the names of the animals listed above for the first time, but these animals were part of the world millions of years ago. Today, scientists say that the universe is about 13.7 billion years old. Our world is about 4.5 billion years old. Our world had to go through certain stages in order to be able to provide the living conditions that take place today. It has taken billions of years for our world, which is not in its current position in both atmospheric and climatic terms and is in a very chaotic order, to have the potential to have a habitat. First, the single-celled and multicellular evolutionary process that began with the transition to the people to present the evolution continued with the derivation of many plant and animal species in this process, some of the changes and developments in natural selection are the result of natural phenomena, and continued with the introduction of the human factor in the form of depletion.

Today, scientists are doing some scientific work to bring extinct animals back to life. The gene map of the obtained fossils is being studied, they want to reproduce these animals with these fossil remains. Of course, we don’t know exactly how realistic this is, but even if it’s not now, such a study may take place in the coming years. For example, a scientist wants to remove the nucleus of an elephant egg and insert the nucleus of a cell taken from the bone marrow of a mammoth fossil. You can be ready to feed a little dinosaur puppy in your garden 🙂 Although it may sound fantastic, developing technology and scientific studies have shown us that nothing is impossible.