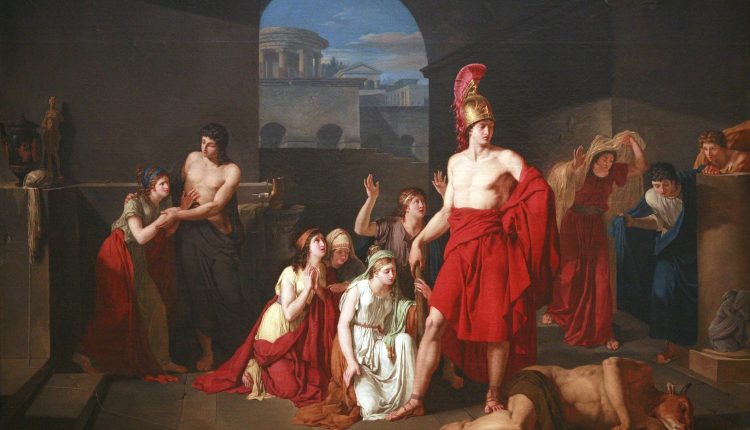 Legend tells us that deep beneath the Minoan palace of Knossos, the terrible Minotaur lurked within a twisting Labyrinth.  The story of the bloodthirsty half-man, half-bull monster is one of the most enduring tales in Greek mythology.  When Arthur Evans excavated the ruins of Knossos on the island of Crete, he immediately believed it to have been the home of the legendary beast.  But why was he so certain?  And could there be any truth to the incredible tale of a man-eating beast, a vengeful god, and a wrathful father?

The Birth of the Minotaur

The story of the Minotaur begins with the death of Asterion, the Cretan king at Knossos.  With the throne now vacant, a new king must be declared among the three sons he has left behind.  But these are no ordinary sons.  Born of Asterion’s wife, Europa, and the mighty thunder god, Zeus, Asterion’s stepsons are demigods and each of them covets the throne.  Minos declares himself the new king, and when his brothers protest, he promises them a sign from the gods.  Praying to the sea-god, Poseidon, Minos asks the god to send him a white bull as a symbol of his authority. In return, Minos promises to ritually sacrifice the animal in Poseidon’s honor. Poseidon hears the prayer and from the sea emerges a beautiful white bull.  Minos, with the obvious approval of the gods, becomes king of Crete and takes his place on the throne at Knossos.

Greek mythology tells us, again and again, that it is very unwise to break a promise to a god.  They are quick to anger and slow to forgive.  But, somehow, Minos forgets this detail and decides that Poseidon’s bull is just too perfect and too beautiful to be sacrificed.  Instead, he picks out a lesser bull and offers that to the sea-god.  Not a god to be trifled with, Poseidon is enraged.  And he will ensure that Minos regrets his decision to double-cross him.

Poseidon turns his sights to Pasiphae, the wife of Minos.  Instead of wooing her himself, he causes her to fall passionately in love with the very bull Minos refused to kill.  A victim of the god’s anger, she is helpless to fight the lust Poseidon has placed in her heart.  She mates with the bull, and from the unholy union, the Minotaur is born.  With the head of a bull and the body of a man, the creature horrifies Minos.  With every passing day, the Minotaur (who is named Asterius, after his grandfather) grows more powerful and fierce.  Minos decides to hide the creature away and enlists the great inventor Daedalus to build a twisting maze deep beneath his palace at Knossos.  Minos imprisoned the creature in the Labyrinth trusting that he would be unable to escape Daedalus’ ingenious trap.

Minos and Pasiphae had several children together, including a son named Androgeus.  Though the details are quite varied, legend tells us that Androgeus died in Athens.  Some stories have him killed by jealous Athenians after winning the Panathenaic Games.  Others say he was killed by the very bull that had sired his monstrous half-brother after being ordered by the Athenian king to slay the beast.  Regardless of how it happened, it was clear to Minos that Athens was responsible for the death of his son.  After leading his people into a fruitless war with Athens, Minos prayed to Zeus for divine retribution against the Athenians.  A devastating plague and widespread famine descended on Athens.  After consulting the Oracle of Delphi, the king of Athens agreed to give into any demands Minos made in order to free his people from Zeus’ wrath.  Imagine for a moment the horror the people of Athens must have felt when Minos demanded that they send sacrificial victims to be slain and consumed by the terrifying Minotaur.  The king knew he could not deny the words of the Oracle, and so begrudgingly, every nine years seven young men and seven maidens would depart from Athens on a ship with black sails.  On Crete, they would be led into the Labyrinth and left to meet their fate at the hands of the Minotaur.  None survived.

The Death of the Minotaur

As the time approached for the third Athenian sacrifice, a young man stepped forward and volunteered his own life so that he might attempt to slay the Minotaur and release Athens from the grasp of the Cretans.  This young man was no other than Theseus, son of Aegeus, king of Athens.  His father, horrified at the prospect of losing his son to the vicious monster, initially forbade him from sailing with the other young victims.  But Theseus would not be deterred.  Making him promise to sail back home to Athens under white sails if he was victorious, Aegeus finally relented, and Theseus sailed off to meet his destiny in the dark confines of the Labyrinth.

Fate was on Theseus’ side when he arrived in Crete.  Ariadne, daughter of Minos and Pasiphae, took one look at the handsome young Athenian and fell madly in love with him.  She knew she had to save him from the monster, but not knowing how, she turned to the very man that had created the Minotaur’s lair.  With the help of Daedalus, Ariadne devised a plan that would ensure Theseus was able to find his way out of the Labyrinth after slaying the beast.  She presented the young prince with a simple ball of thread, instructing him to lay it out along the corridors so that he could follow it back out once the monster was dead.  Theseus agreed to accept Ariadne’s help, entered the Labyrinth, killed the Minotaur, and emerged again triumphant and unharmed.  He then fled Crete with Ariadne at this side.

Perhaps it was the thrill and excitement of his victory, or maybe it was the whirlwind romance with the young princess (who he abandoned on the island of Naxos) that clouded Theseus’ mind on the journey back to Athens.  Whatever it might have been, Theseus forgot one very important promise he had made to his father.  Watching from a high cliff overlooking the sea, Aegeus eagerly awaited the returning ship that would bear with it news of his son’s fate.  When the ship with black sails slipped into sight, Aegeus was overcome with grief, thinking that his son had died at the hands of the Minotaur.  In his sorrow, he plunged off the cliff and died in the sea that would forever afterwards bear his name.  Theseus was appointed king on his return and went on to become one of the greatest heroes of Greek mythology.

The Search for the True Minotaur

Sir Arthur Evans, a British archaeologist, began excavations at the palace of Knossos in 1900.  Beneath a flower covered hill, he uncovered a huge complex featuring more than 1300 rooms and covering 6 acres (more than 24,000 square meters).  The ruins, dating to the Bronze Age, had stood at the heart of the Cretan civilization that had once flourished there.  Evans immediately connected the site to the home of the legendary King Minos as described in Homer’s Iliad and Odyssey.  Naming the culture “Minoan” in honor of Minos, Evans began looking for evidence of the Labyrinth’s existence.  He never found it.

What Evans did discover, however, was a complex filled with powerful bull imagery.  Intricate mosaics, murals, and pottery all featured images of bulls or bull horns.  One of the most famous murals depicts young Minoans leaping over the back of a large bull, possibly in a religious ritual.  The bull was undeniably important to the Minoan people.  But there are no depictions of the Minotaur and no signs of the famed Labyrinth.

Excavations continue to this day on Crete and at Knossos.  Some believers hold fast to the idea that the Labyrinth still lies buried deep beneath the palace ruins.  And perhaps they’re right.  Maybe some day we really will uncover Daedalus’ maze, the tomb of Minos, and the remains of the legendary monster.  Until then, we can only speculate about how this myth became so ingrained in the Greek imagination.

One possible inspiration for the Labyrinth may come from the ruins of Knossos itself.  With its hundreds of rooms, narrow corridors, and sprawling size it is possible that the complexity of the palace gave birth to the story of the twisting maze.  Certainly, it could be a confusing place — especially for someone unfamiliar with Knossos.  Add in the bull imagery around every corner, and it’s not hard to discern why Evans (and many others) believed the ruins to be the home of the Minotaur.

Some modern researchers point in a different direction to explain the emergence of the Minotaur legend.  Crete sits in a geologically volatile region plagued by frequent earthquakes and occasional volcanic activity.  Could the Minotaur have been inspired by the underground groaning of tectonic plates as they shifted?  The ancient Greek poet, Callimachus, did write about the bellowing of the Minotaur from deep beneath the palace.  Were these bellows actually from the earth itself?    Perhaps the beast became an explanation for powerful natural forces the Minoans struggled to survive and explain.

There are countless theories, ideas, and possibilities.  And as more is uncovered on Crete, it is doubtless that even more will emerge.  The truth is that we have no physical evidence of a half-man, half-bull creature roaming beneath Knossos in an intricate maze.  We most likely never will.  But what we do have is a rich mythology recalling a time when the gods walked among men and dangerous creatures were born from their anger.  And we have the real history of a powerful people that once ruled Crete and established Europe’s first great civilization.  The myth of the Minotaur has endured for millennia and continues to capture the imagination of all who hear his story.  Regardless of how it happened, Knossos gave birth to the legendary monster whose memory will forever roam its labyrinthine ruins.

Enjoying my articles on Historyen? Join me on Facebook over at Laurie Martin-Gardner, Author and Artisan or visit my website at www.lauriemartingardner.com. I look forward to connecting with you!