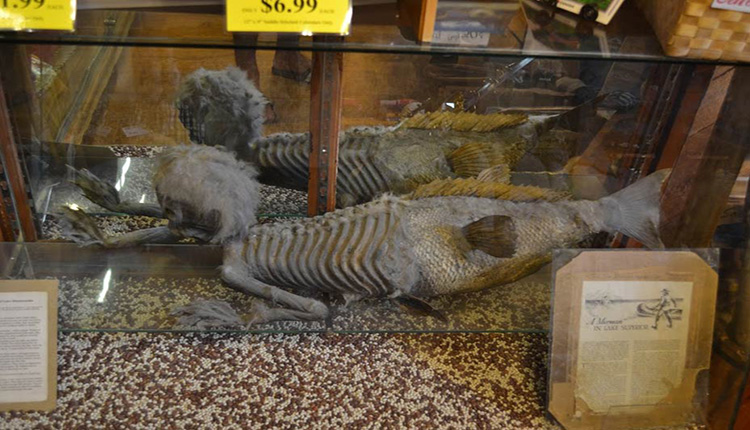 How Did The Story of Banff’s Merman Come About?

The Town of Banff is located in Banff National Park in Alberta, Canada. What made this town so famous is a merman mummy found in a shop. According to some, this is a completely made up story. It starts with rumors of a monster being seen in the lake. This is because the mountain near the lake is called Spirit Mountain and the water of the lake is called Spirit Water. According to the people who lived there, it was quite normal for a monster to exist in such a sacred place. So they both believed that there was a monster there and they also convinced the people around them that there was a monster there.

Another story is to scare the invaders  who came there and drive them away from the area. The town of Banff was a point that attracted attention with its location and geographical beauty. As we said above, the fact that it was called Spirit Mountain and Spirit Water meant that supernatural things could happen there. The locals convinced the invaders  that there was a sea monster living in the water to drive the invaders  away from the area. In this way, they managed to protect their territory.

The Enoch Baptiste Story in A Merman in Lake Superior

This article describes Spirit Mountain and Spirit Lake in Banff Township as follows. “Northeast of Lake Minnewanka, there is a mountain with a high, sharp, tower-like peak. The tip of the mountain is so steep that the snow does not stay on the mountain and no matter how cold it gets, the top of the mountain does not snow. This mountain was called Spirit Mountain because it was thought to be lived on by spirits. The lake next to it was named “Minnewanka”. Minnewanka is a word that means Water of the Spirits. Whenever they walked around the lake, they would hear the voices of the spirits. Even if they walked where the voices came from, they could hear the voices but could not see the things that made the voices.

“Once when we were camping by the lake, my father heard what sounded like a drum. We thought it was coming from the water. We could also hear these sounds further down the lake. Soon we saw something approaching the shore of the lake. It came close to where I was camping and then turned back.”

This return didn’t last long. Soon a monster appeared from the moving part of the lake. It wasn’t exactly a man, but it wasn’t a fish either. It was a strange creature, half fish and half man.It swept the water towards the shore and appeared to us in all its magnificence. Then the fish man suddenly disappeared.

We and other people around us also saw this strange creature. We were all so frightened that we and none of the people who saw the creature ever camped in that area again. All the Indians started to stay away from that water. There was no fishing or canoeing on Lake Minnewanka until the white people came.

This creature was not the only creature that lived in the lake. There were other creatures, but all the creatures except the one we saw were killed by lightning strikes.

Many years later, many Indians are still afraid of that lake. A few years ago Indian boys were working here constructing a dam. As the dam was being constructed, terrible accidents started happening there and people died in these accidents. We and the people who live here thought that these accidents were caused by the Spirits who live here. The fact that trees were being cut down for the construction of the dam was angering the spirits here and they were causing accidents here as punishment.”

Explanations for the Merman Story

This story could be made up or it could be true. So to get closer to the truth, it would make much more sense to find out why this story was created. There are many possibilities. The first possibility is that a monster really did appear in the lake (this is unlikely). A second possibility is that it was to drive away invaders from the area. The lake and the mountain were considered sacred places. According to the legend of Stoney Nakoda, the places called Spirit Mountain and Spirit Lake scared the locals away, and with this, the invaders were kept away by creating supernatural legends.

The Merman is a very different creature. When we look at the rib cage, although it looks like real human skin, it is thought to be made of a different material to make it look like human skin. If we look at the underside, it is a structure made entirely of fish covered with flakes. At the same time, the merman mummy attracts great attention with its short and gray fur-like hair. Although this mummy does not have a very aesthetic structure, it attracts the eyes with its story.

This story and this mummy may be real or unreal. Many people think that this mummy was made both commercially and to support the story. Although the stories told in the past and the explanations made are remarkable, the story of the Man of the Sea has not been proven.