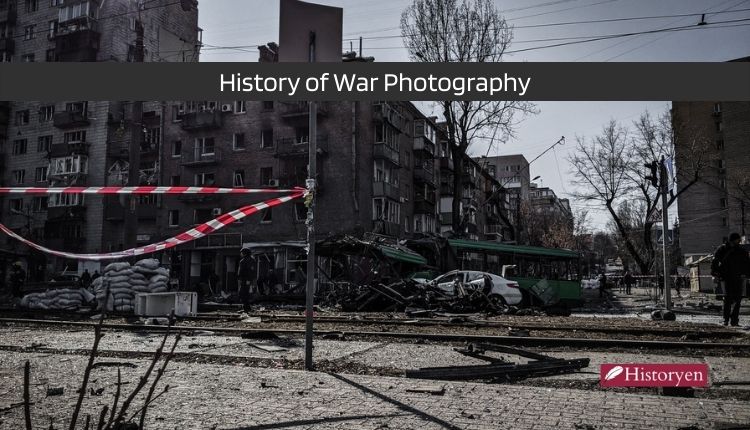 War photography is called taking pictures of life, conflicts and things around during war in places where there is war. Although the notes taken during the war, diaries kept, drawings and pictures provide information, war photography clearly reveals the conditions of those moments. The camera was invented in the 1830s. Photographs were used to record historical information, often photographed to immortalize good memories, but occasionally bad memories such as war were also photographed.

War photographers initially tried to produce a daguerrotype using a silver-plated sheet to create a single image. When photographing this way, the images took minutes to develop and could not be processed immediately.

The first known war photography was a series of daguerrotype shots during the Mexican-American War in 1847. An anonymous American took these photos. The first known war photographer is Hungarian – Romanian Carol Popp de Szathmari. He took photographs of various officers in 1853 and of battle scenes near Silistra and Oltenita during the Crimean War in 1854. He presented his 200 photo album, which he created in 1855, to Queen Victoria of the United Kingdom and Napoleon III, the leader of France. Nine of these photographs have survived to the present day.

In 1854, French photographer Ernest Edouard de Caranza photographed French soldiers in camps near Varna. In 1855, Roger Fenton was a war photographer, but he couldn’t take very good pictures with his bulky equipment.

Early cameras were quite incapable of capturing a moving scene. That’s why scenes that took place in the American Civil War between 1861 and 1865 were reconstructed by Alexander Gardner and Mathew Brady. These two photographers had reconstructed the bodies of soldiers who had died during the Civil War to create a clear picture of the brutality of the war. The terrible reality of the war could be better explained in this way.

1878 – 1880 Second Anglo-Afghan War, photographed by John Buke traveling with Anglo-British forces. Burke’s goal was to sell the album of war photographs. Portrait images of soldiers were also frequently included in this album. The still underdeveloped cameras required the scene to remain still for several minutes before a photograph could be produced. So those on stage were posed in a way that minimized movement and was comfortable.

Almost all wars of the 20th century had many war photographers, and many were killed. Robert Capa, who successfully photographed the fall of Paris, the Spanish Civil War, the Normandy Landings and the conflicts of the 1950s, died in 1954 when he stepped on a land mine in Chingindi. During this period, photographs were reproduced and distributed. The reproduced photographs were used as historical records, while enabling the public to learn about the course of the wars.

War photographers could be killed trying to get their photo albums off the battlefield. In fact, the International Conventions of Armed Warfare protect photographers and journalists. But photographers and journalists can be considered targets of warring groups. Soldiers could try to kill war photographers to prevent the spread of truth in the photos. During the 2003-2009 Iraq War, 36 camera operators and their photographs were killed or abducted. The killing of two Iraqi journalists working for Reuters by being deliberately targeted by a helicopter during the US airstrike in Baghdad on July 12, 2007, was revealed by the release of gun camera footage by Wikileaks.

German photographer Frauke Eigen had prepared a photography exhibition about war crimes in Kosovo. Eigen had drawn attention to war crimes by photographing the corpses he had exhumed, focusing on their clothes and belongings. These photos were later used as evidence by the War Crimes Tribunal in The Hague.

Protests Against the Vietnam War