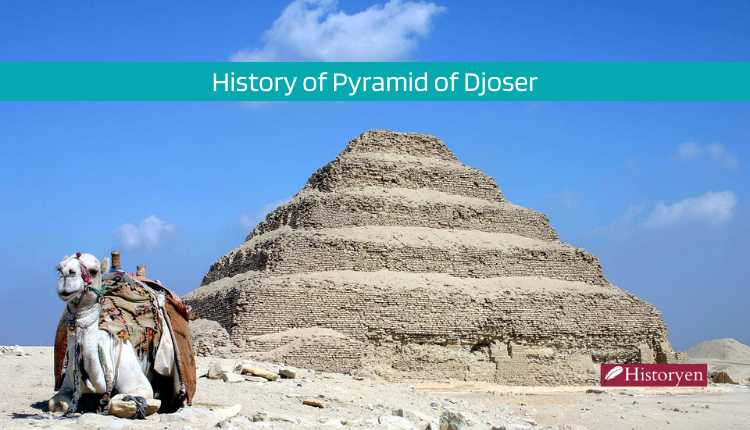 The pyramid of Djoser, which is also known as the Step Pyramid, is one of the oldest stone buildings built in Egypt. This amazing structure is located in Memphis, Egypt, and was built around 27th century BC. According to findings, it was the largest and tallest building in the world when it was built. Originally, the height of the pyramid was 62.5 meters and most of the other pyramids, it was polished with limestone. Another important feature of the Pyramid of Djoser is it is considered to be the first large-scale stone building made in history. It was discovered in 1979. After 14 years of restoration, the complex reopened for visits in 2020.

Djoser was the king of the 3rd Dynasty of the Old Egyptian Kingdom. Although experts cannot be sure about his order on the throne, he is considered to be the first or second king who rules the 3rd Dynasty. He is one of the longest-lived kings and managed to complete the Pyramid of Djoser during his ruling. In fact, his name is unknown, and he received his name a thousand-year after his death. The scale of the pyramid is a great example of the richness and manpower of his kingdom. His pyramid constituted an example of many pyramids built after his reign.

Sites in Pyramid of Djoser Complex

The pyramid of Djoser complex is made of seven parts. Some of these areas are used before his death and others are devoted to his afterlife. The complex is surrounded by Enclosure Wall which is 10.5 meters high. There is also the Great Trench which is 40 meters wide and 750 meters long. Besides these parts, there are also Roofed Colonnade Entrance, South Court, South Tomb, North Temple and Serdab Court, Hed-Sed Court in the complex. Although you can visit the Pyramid of Djoser in Egypt. These complex parts are not open for public visits.