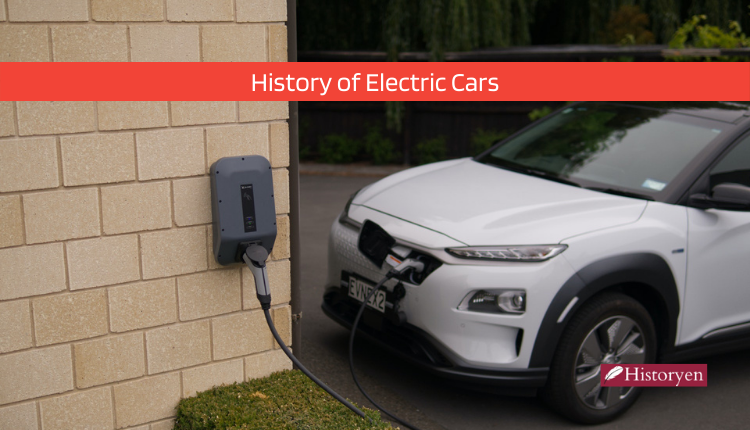 Although electric cars became worldwide popular during the last decade, their history dates back to the 1800s. Of course, the birth of electric cars was not sustainable, but the first attempts were made in the 19th century.

Considering the popularity and amazing benefits of electric cars, we wanted to discuss their history in this guide. We have provided each milestone that helped primitive electric motors to turn into models such as Tesla.

First Electric Car in the World

Unfortunately, there is no clear evidence about the invention of the electric car. There are no inventors or countries, who can claim the reputation. Instead, electric car attempts were a set of breakthroughs, and the first electric car hit on the roads in the 1800s. The evolution of this technology did not happen in a day, but it evolved from the battery to the electric motors.

In these years, many companies, and innovators, especially in the Netherlands, Hungary, and the United States, started to work on battery-powered cars. All attempts were made with small-scale electric cars too. Robert Anderson, who was a British inventor, attracts attention among all inventors. He managed to develop the first crude electric carriage.

However, we had to wait until the second half of the nineteenth century to invent the first practical cars. Most of these cars were built by English and French inventors. Upon these developments, William Morrison developed the first electric car in the United States in 1890. In fact, it was an electrified wagon rather than a car.

Believe it or not but a third of all vehicles in the United States were electric cars by 1900. Their sales continuously increased in the following decade and even some companies started to produce electric taxi fleets.

It is safe to say that electric cars during the 1900s were more popular than they are popular today. They were perfect cars, especially for short trips to cities. Considering the conditions of the roads outside the cities, only a few car models were able to handle these trips.

As electric cars started to be widely preferred, charging stations became widely available. Although these cars were preferred by almost everyone since they did not have to worry about gasoline or steam, they were especially popular among female urban residents.

The Rise of Modern Electric Cars

Although we still could not achieve the same popularity in society, it is a fact that the modern electric car market is enjoying strong sales. It took more than a century to understand the adverse effects of gasoline cars, but we finally understood the importance and benefits of electric cars.

Of course, constantly increasing gasoline prices has a significant contribution to the sales of electric cars too.

The true rise of modern electric cars started at the beginning of the 21st century with Toyota. Toyota Prius was released in 1997 and it achieved the title of being the first mass-produced hybrid car in the world. In the following decade, Prius was preferred by many celebrities and became the best-selling hybrid car all around the world.

Of course, we should not underestimate the contribution of Elon Musk and his startup Tesla Motors, which was established in 2006. Thanks to Elon Musk’s connections, Tesla Motors received a $465 million loan from the Department of Energy to establish a manufacturing facility and paid the full loan nine years early.

This huge investment also attracted the attention of other brands. Brands such as Chevrolet, Nissan, and Hyundai released their first electric cars. Today, the number of electric cars on the roads is increasing every passing year.

How About the Future of Electric Cars?

Considering the unbelievable collapse of the electric car market in the 1900s, it is hard to predict the future of these cars. The oil and gasoline market is ruled by multi-billion companies, which we all know have a significant influence on the decisions of all countries.

If there will be no intervention in the market, it is quite safe to say that we will not see any gasoline cars on the roads in three decades. However, it is quite possible that some companies may intervene in the market in different ways or regulations. Considering that electricity companies have been privatized in almost all countries in the last decade, there will also be a huge electricity cost rise.

Needless to say, electric cars have a great advantage, which is zero-emission. These environment-friendly cars are also equipped with art-of-state technologies to provide a great driving convenience and safety. In the following decades, we may also see more investments in infrastructure compatible with electric cars.