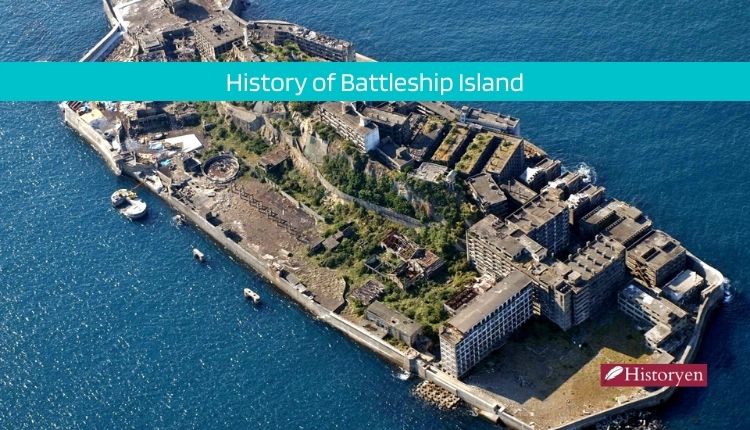 Abandoned in 1974, Battleship Island was once the most densely populated place in the world. Although its real name is Hashima, its resemblance to a warship when viewed from above has earned the island the nickname Battleship Island, the Japanese Gunkanjima. A community lived on the island from 1890, and they were mining coal from an underwater mine near the island to fuel Japan’s growing shipbuilding industry. The population of this small island was close to 6,000 at that time. When coal dwindled and fell in value in the underwater mine, workers on the island left and Hashima became a ghost town.

The abandoned island of Nagasaki Prefecture, Gunkanjima, looks like a post-apocalyptic one. A UNESCO World Heritage Site, this island is actually a symbol of Japan’s rapid industrialization. Before Mitsubishi bought the island in 1890, there was no human life and no settlement on the island. Since then, concrete apartment blocks have been built on the island. When high wages were promised for workers in the 1950s, the island’s population approached 6,000 people.

The Painful History of the Island

Hashima Island has rapidly increased in popularity after being designated a world heritage site by UNESCO. However, the history of the island unfortunately also contains bad things. Many people were forced to work on the island before and after World War II. Although people who work in environments with no job security and live in terrible conditions experience great pain, they could not share their pain with the outside world because most of them died informally. Instead of telling the history of the island with these subjects, Japan prefers to tell it as the acceleration of industrialization. Still, the Japanese government has promised to set up an information center and memorial for the forced laborers on Battleship Island in the coming years.

After people left the island, nature began to reign on the island. Flowers, grass, and vines continue to flourish as the steel and concrete on the island rusts and falls. If you want to take pictures of the buildings on the island on the same day every year, you can see that the buildings become greener every year. Hashima’s apartments are exposed to weather events and seawater from typhoons. Some steel has reached the breaking point, so buildings can collapse at any time. There are no building reinforcement works or plans for the island, which is one of the tourist attractions.

Until 2009, it was forbidden to go to the island. Tourists who come to Fukuoka and Nagasaki after this date do not want to leave without seeing Hashima Island. To visit this abandoned island, you must take a tour boat in Nagasaki Harbor. The buildings on the island are both abandoned and neglected, so they are all in danger of collapse. For this reason, you should definitely go to the island with a guide and if possible with a sightseeing tour program. Trips to the island are canceled due to bad weather conditions during the winter months, flood season, and heavy rainy days. So the best season to visit the island is Summer.