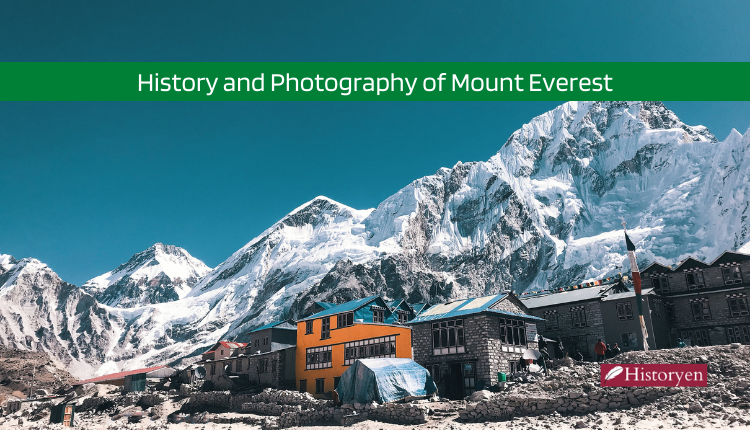 Before planning your trip to Everest Base Camp, it is best to know a little about the first conquerors of Mount Everest. Where does the name Mount Everest come from? Mount Everest was called Peak XV until 1865, provided by the Indian Topographic Service.

The aim of the 1921 expedition was to investigate how it would be possible to get close to Mount Everest, identify possible routes to climb the mountain and if possible, climb the highest mountain in the world. Charles Kenneth Howard-Bury (1881-1963) led the 1921 expedition and George Mallory, who had never been to the Himalayas, was included in the team. Both became extraordinary photographers. As events unfolded, Mallory became the main climber de facto.

As chairman of RGS, the Younghusband stated publicly that the expedition was “beautifully equipped for knowledge-gathering”. But acquiring knowledge was not the only goal the expedition had in mind.

The Beginning of Mount Everest Photography

Howard-Bury wrote a book about the 1921 expedition, Mount Everest: The Reconnaissance, and took many of the journey’s spectacular photographs, including the people, places, and culture of the region. These first images are now part of RGS’ larger collection of more than 20,000 Everest images. They are also an extremely important source of historical evidence for the Tibetan and Nepalese peoples. The Everest Society’s archive contains some of the earliest photographs of people in the region, as well as a valuable resource for wider research.

The photos were taken by George Mallory, Charles Howard-Bury, Alexander Wollaston and Edward Oliver Wheeler along with Abdul Jalil Khan, and were originally intended to fulfill the purpose of the expedition – to conduct new and more detailed research in the region. The collection also includes some of the best panoramic photos of a high mountain range ever taken.

The height of Mount Everest?

In May 1999, American climber Conrad Anker found the body of George Mallory, and from the artifacts he collected, it was concluded that Mallory and Irvin may have reached the top. The main piece of evidence was the fact that the photo of Mallory’s wife, which he promised to leave at the top of Mount Everest, was not found if he managed to reach the top. However, it is almost impossible to prove this claim today. Someone needs to take a picture of Mallory’s wife on top of Mount Everest.

First access to Mount Everest made it possible to prove that man can survive on the highest mountain in the world (formerly Annapurna I).

The dead zone of 8,000 meters above sea level is a place where oxygen is lacking and the pressure is extremely low. Even using an oxygen bottle cannot meet the needs of the body. Above 8000 meters the body does not absorb any food, so that the energy balance is negative.

It was February 17, 1980. Polish Krzysztof Wielicki and Leszek Cichy were at the top of Mount Everest at 2:25 PM, after a deadly battle with the mountains, hurricane winds and temperatures as low as -50°C.

It is enough for today to plan your expedition if you are energetically and financially prepared for the attempt to reach Mount Everest.