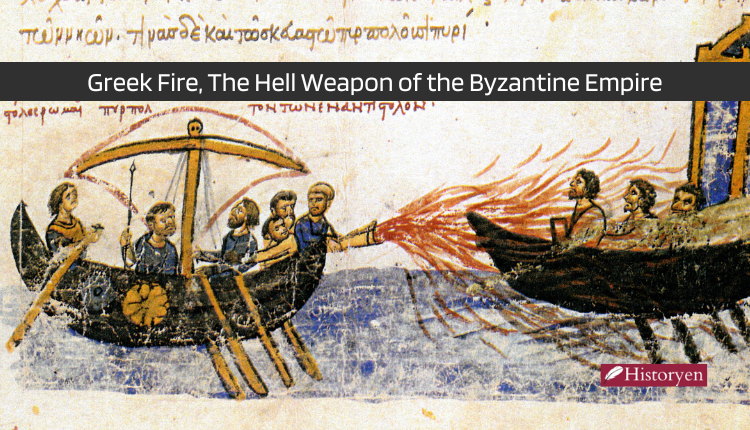 The Byzantine Empire, after years of tiring war with the Sassanid Persians, had to make defense against Muslims in the late seventh century. Constantinople, the capital of the empire, was not safe in Byzantium, which was caught unprepared against Muslim conquests. In the 670s, a Syrian scientist named Kallinikos made an invention called “Greek Fire” that would do very important things for the Byzantines in the future. The Greek fire, a burning weapon, strictly extended the life of the Byzantine Empire.

The Byzantine Empire survived thanks to the Greek fire

During the Middle Ages, the Byzantines used the Greek fire against the Slavic ancestors of the Russians and the Saracens. The enemies often could not resist the effects of this weapon, so the Byzantine Empire navy became a real force.

Greek fire even burned in water

Greek fire was not the first weapon capable of setting fires in the ancient world. People were already throwing incendiary substances at the enemy with flaming arrows and other weapons. However, all of these weapons were ineffective when they faced water. The difference of Greek fire emerges here. Greek fire was very destructive, especially in naval battles, because this weapon continued to burn even when faced with liquid. The Greek fire, which has become a must for the Byzantines in every naval war, was used in many wars for centuries.

Greek fire was obtained from a very flammable fluid mixture. This weapon, which could spontaneously flames, was basically created for the naval wars. Thanks to this weapon, the Byzantines were able to set fire to enemies. At first, the fire was hiding in containers and jars and thrown into the enemy ships, and then it was converted into a flame machine by pressurization.

On the bow of Blackbeard’s flagship, there was a secret weapon named the Revenge of the Queen Anne, which was based on the Greek fire device of the Byzantines. A sulfur spray, released by a skeleton figure, sent the fire of hell towards the enemies. The Greek fire was sometimes thrown from the cannons placed on the top of the walls of the castles. Some of these cannons were produced in the form of a lion head so that they could look more terrible.

Emperor II. Romanos counted three things that should never be allowed to get into the hands of enemies: the imperial princess, the empire’s outfit and the recipe of Greek fire.

Constantine Porphyrogennetos, father of Romanos, said that the recipe of Greek fire was delivered to I. Constantine by an angel of God. No enemy was able to steal the recipe, which had been kept a state secret for centuries. Over the years, the Byzantine ships carrying Greek fire have been seized by enemies, but no enemy could copy the mixture of the weapon. The machines used by Byzantium to make this mixture were not found by the enemies.

It is still unknown how

During the fourth Crusade in 1203, the Crusaders had surrounded Constantinople, despite this threat to the most important city of the empire, Greek fire was not used to defend the city. Although the reason was not known exactly, either the Byzantines had lost the recipe of the fire, or the empire did not have enough resources to produce Greek fire. After this date, Greek fire was never used again.

The secret of the Greek fire entered the grave with the Byzantine Empire. Although modern chemists have various opinions about the recipe for Greek fire, we have never been able to perfectly copy this weapon.