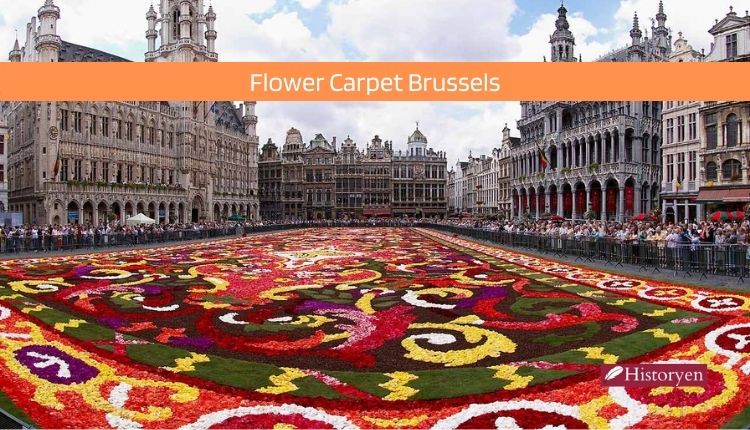 One of the Most Colorful Festivals in the World

In many countries of the world, festivals with different concepts are organized at various times. The purpose of these festivals is to promote the region and to contribute to the economy of the region by attracting more tourists to that region. However, Flower Carpet Brussels is the most colorful and interesting of these festivals. It is a very entertaining organization where colorful carpets are exhibited. This festival, which takes place in Brussels, the capital of Belgium, is usually held in July – August every year.

The festival, which is held every two years in Grande Place, one of the historical squares of Brussels, attracts the attention of tourists. Carpets of flowers are exhibited in this festival, which is organized entirely by volunteer florists. Carpets made are exhibited during the festival with 300 flowers per square meter. Each year, a different theme is chosen and models suitable for that theme are prepared. In particular, some countries are targeted and carpets with flowers are made according to the concept of that country. The festival usually lasts for 2 days and these prepared carpets are open to visitors during the festival.

The flower carpet prepared to cover an area of 2000 square meters, consists of an average of 700,000 begonias. As you know, Belgium is one of the largest flower producers in the world, capable of producing 60 million begonias every year. Thanks to this festival, they both promote their own countries and present these magnificent carpets to tourists. A very clever festival indeed! Not only flowers but also fruits and vegetables are used for the carpets prepared for this festival. All the fruit and vegetables used are products that are usually grown in Belgium.

This festival, which is held every 2 years, is an event with colorful images. The first event, held within the scope of Flower Carpet Brussels, started in 1971 by a landscape architect named Stautemans, by preparing smaller rugs and carpet patterns. It has been developed over time and has continued from 1976 to the present. After the grass flooring of the carpet, which was designed and motifs were drawn in advance, the process of placing the flowers is started. The Begonia flower used is preferred because of its resistance to bad weather conditions and sun. Approximately 700 thousand begonias are used in the making of the carpet. August was chosen for the flowers to be exhibited longer.

The activities held within the scope of the flower festival, of course, are not limited to carpets. There are also many different organizations held in the town hall.

The best florists from Belgium and internationally decorated the most prestigious rooms of the Brussels City Hall, a jewel of Gothic architecture, a UNESCO World Heritage Site, with flowers. Brussels Flower Carpet and Floralien Flower time jointly established by the organizers in 2013 within the scope of activity of more than 30 designers with architectural and floral decorations of all age’s killer Brussels city hall almost was converted into a botanical garden. Every two years, the Flower time festival, as an alternative to the Floral Carpet of the Grand-Place in Brussels, allows you to explore the magnificent Brussels City Hall as you’ve never seen it. For five fascinating days, an entrance hall, corridors, reception rooms and dozens of unusual and amazing flower arrangements turn the magnificent building into an idyllic walk in a magical universe filled with intoxicating smells and shimmering colors. Dec August 14 to 18, visitors can visit the Brussels City Hall on the Grand Place square for 8 euros.

The Siberian Ice Maiden Protected by 2500 Years of Ancient Ice