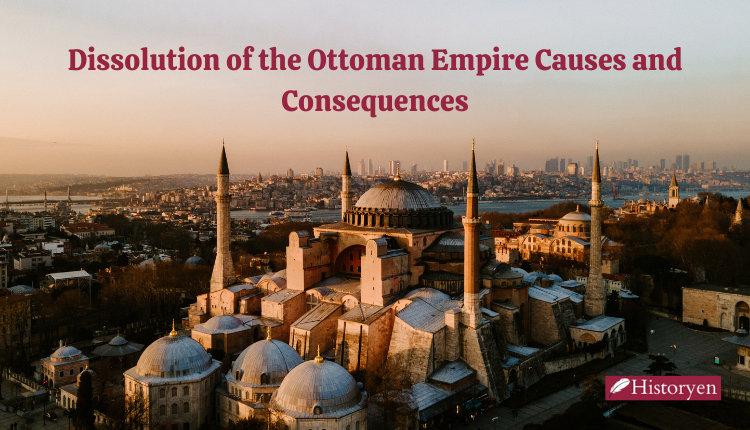 Dissolution of the Ottoman Empire Causes and Consequences

There is no single mighty empire that managed to stand the time. It is their vicious cycle, they are born, they rule, they conquer and then they dissolve. Although there are a bunch of mighty empires in the world, none of them managed to end an era and start a new one. Of course, we are talking about the mighty Ottoman Empire.

However, just like all other mighty empires, this empire also broke into pieces in time. When your power threatens the world, all eyes will turn on you and you make plenty of new enemies. In this guide, we are going to talk about five main reasons for the dissolution of the Ottoman Empire.

So, let’s stop wasting time and check these causes one by one. It is worth noting that there are also additional reasons, but we have only compiled the most important five reasons.

Took Part in the Wrong Side in World War I

Did you know that the Ottoman Empire did not lose a single battle in World War I? In addition to this, they were way behind in terms of technology compared to their enemies. Moreover, they were also outnumbered in many battles.

On the other hand, the Ottoman Empire was weak in those years and thus, when their allies lost, they could not resist anymore and were considered to be lost on paper. The secret treaty signed with the Germans was one of the main factors in the dissolution of the empire.

The Rivalry Between Russia and the Ottoman Empire

Other Countries Teamed Up for Dissolution

Of course, one of the main reasons is other countries gathered together to dissolve the Ottoman Empire. In fact, this is a century-long effort, which helped them to dissolve the empire without being able to win a single battle against them.

Britain, France, Australia, Russia, and many other small countries teamed up to take down the empire over the years. Most of these countries are European countries and they promoted the small nations living under the rule of the Ottoman Empire to revolt.

This is quite closely related to the previous cause. Many nations started to have a word in the internal affairs of the empire with progressive methods. In addition to this, Ottoman Turkish was quite challenging to read and learn. This led the population to be uneducated and the empire forgot about investing in science.

As you can guess, this is one of the main reasons for the dissolution of the Ottoman Empire. The empire lacked much military equipment and had to fight with outdated or primitive weapons in the battles.

It Was Ruling a Very Wide Geography

When other countries encouraged these nations and ethnic groups to revolt, the Ottoman Empire could not keep up with the riots. This sped up the dissolution of the Ottoman Empire. In those times, the Ottomans were ruling nations such as Hungary, Israel, Palestine, Syria, Arabia, Macedonia, Egypt, Greece, Lebanon, Jordan, and much more.