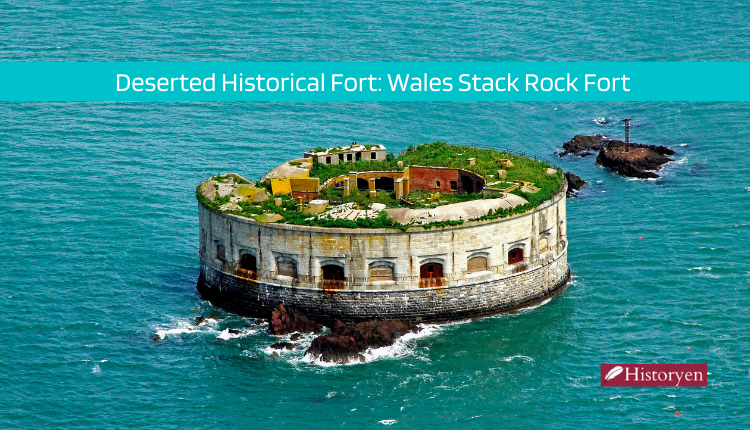 Some news that has been on the world agenda in recent years may have caught your attention. For example, deserted historical forts for sale. Stack Rock fort in Wales is one of them. Yes, you heard right. You can buy this castle. But before that, we would like to give you some information about this castle. At least you get some historical information about the castle, even if you want to buy it.

It is a magnificent building built between 1850 and 1852 for purely protection purposes. It was built to protect the shipyard belonging to the royal navy from enemies. 150 soldiers were deployed to this structure, which was built in Wales. In fact, other structures of this size and feature were built at that time, but Stack Rock Fort was the most magnificent of them. In 1859 it was further developed and its armament increased.

In 1929, however, it lost its importance and became completely ineffective. No one has been interested in this building since then. It was one of the most important structures of those years in terms of being built around the sea and its geopolitical position. However, like many historical buildings, Stack Rock took its place among the forgotten structures.

A buyer recently purchased this building and has asked not to be named. He said he would open this place to the public and organize tourist trips. However, over time, he could not do what he said, and Stack Rock Fort still stands as before. According to the rumors we heard, the price was calculated at 400,000 Euros. Let’s see if anyone can buy this magnificent building. In fact, this building needs to be restored and preserved to respect history.

Due to the ongoing war in the 1800s, a defensive fort was built on a small island in the Milford Haven Waterway in Pembrokeshire in Wales. This was Stack Rock Fort. In fact, before this fort was built, Thomas Cromwell, one of the important figures of that period, suggested that it be built in 1539 to protect the waterways. In 1748, Lewis Morris proposed establishing a research center here to study shipwrecks. However, the last proposal was accepted and everyone agreed that a defensive fort should be built. The construction process, which started in 1850, was completed in 1852, and this is how the legend of Stack Rock began.

Originally designed for artillery only, Stack Rock Fort was later used as an arsenal. A small military unit was deployed to this structure, which was protected by 30 soldiers. In 1929, all weapons were canceled and the fort was completely disarmed. It was decided to sell this place and the first sale announcement was made in 1929.

The initial sale price at that time was just £160. Yes, you heard it right, £160! It was put up for sale again in 2005 and sold for 150,000 Euros. But due to developing military and security concerns, it was decided that this building could pose a security risk. Because it was right in the middle of the sea, risking the coast’s safety. This building, which was sold to a private owner in 2022, is currently on sale for 400,000 Euros. There were only 3 guns in the castle at first. The capacities of these weapons have been changed over the years and updated according to the security situation. After World War II, only 2 guns remained in the fort. Stack Rock Fort is one of the oldest structures in UK history. Although it does not have much military significance, it is among the most magnificent structures that have survived to the present day.