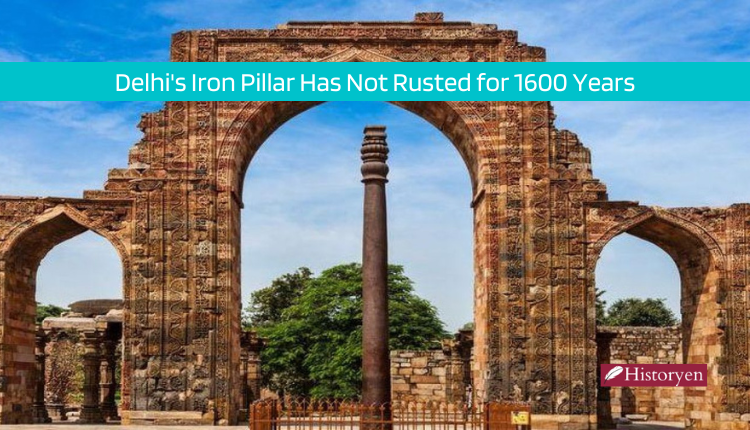 The Iron Pillar of Delhi is something famous in India. This 7.21-meter-high structure, which is 99% resistant to corrosion and never rusts, is now 1600 years old. How was such a chemically advanced substance produced 2000 years ago?

The pillar, made of 98% wrought iron, continues to be the subject of various scientific studies from all over the world. According to one study, the critical corrosion resistance substance called iron hydrogen phosphate hydrate used in the construction of the pillar made the pillar resistant to corrosion. The pillar has shown high resistance to corrosion for 1600 years despite harsh weather conditions, a testament to the skill of the ancient Indian blacksmiths. Metallurgists and archaeologists have shown great interest in this pillar. It is known that the pillar, which weighs more than 6 tons, was built by Chandragupta II Vikramaditya, who lived in AD 375 – 414.

It is known that the required temperature for the formation of such a pillar cannot be achieved by burning coal. Inscriptions on the pillar indicate that the pillar was erected as a flagpole in honor of the Hindu god Vishnu and in memory of the Gupta King Chandragupta II. The pillar testifies to the high skill level of ancient Indian blacksmiths in extracting and processing iron.

Mehrauli is a suburb of Delhi. Built in the 5th century AD by a king named Chandra, described as the great Chandragupta II of the Imperial Gupta Dynasty that ruled northern India, this pillar was installed in front of a Vishnu Temple in the Udaigiri Hills near Vidisha. During the Delhi Sultanate in the 13th century, Turkish Muslim invaders looted Vidisha and brought this pillar to Delhi as a spoil of war.

Dimensions of the Pillar

The height from the base of the pillar to the top of its capital is 7.21 m. 1.12 m of the pillar is under the ground. The bell pattern head is 306mm. The weight of the pillar is more than 6 tons. It bears a Sanskrit inscription in Brahmi script dating from the 5th century AD. In this inscription, the military skills and achievements of the king named Chandra are written. The pillar contains high phosphorus and low sulfur. The silhouette of the pillar is the emblem of the Indian Metal Institute and the National Metallurgical Laboratory.

Balasubramaniam argues, based on archaeological, metallurgical and iconographic evidence, that the pillar was originally found in the caves of Udayagiri. This is the accepted theory in academia. There are those who argue that the location of the Udayagiri caves near the Tropic of Cancer is of special astronomical importance and that the iron pillar has a specific place in this astronomical diagram.

How Was The Pillar Moved To Its Final Place?

Who brought the pillar to its current place in the congregational mosque, and when? The Turks may have replaced the pillar in the current mosque masjid after they conquered Delhi. During the assembly process, part of the pillar that was originally buried underground was placed above ground level. Since that day, the pillar has been standing in this form in the mosque complex.