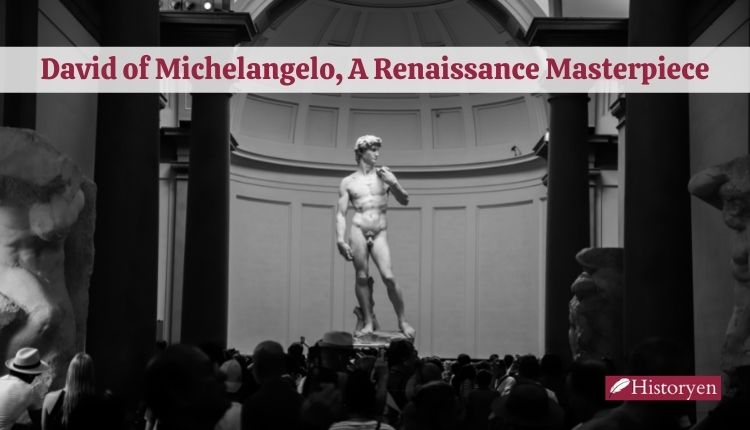 David of Michelangelo, A Renaissance Masterpiece

Without a doubt, the David of Michelangelo is one of the most notable sculptures in human history. This is one of the best expressions of human anatomy, our observation ability, and our finest art. It is also one of the leading and most popular masterpieces created during the Renaissance period. It was completed by Michelangelo Buonarroti in 1504. This masterpiece portrays the moment when David decides to attack Goliat. This one-piece sculpture was carved on marble and its height is 5,17 meters. Today, it is referred to as the symbol of Florence, which is also considered to be the capital of the Renaissance period.

Important Details of David of Michelangelo

One of the most important details of this sculpture is it portrays the perfect human ratio. It also includes all the fundamentals of sculpting art, which are perfectly implemented. David holds a slingshot on his shoulder, which he is planning to use in the battle against Goliath. Experts also note that the sculpture mimics the divine genesis. It will be worth noting that this masterpiece is also one of the best examples of contrapposto style. In fact, the ratio of the sculpture is quite different than the actual human body. The upper body and head are relatively larger when compared to the lower body. However, since the sculpture was going to be placed on high ground, visitors would perceive the perfect human ratio when they check it from a lower level.

Copies of David of Michelangelo

There are many copies of David of Michelangelo all around the world. You can find one in London, Australia, Los Angeles, and Las Vegas. In addition to this, Florence gifted one of the exact copies to Jerusalem in the 3000th year of the Jerusalem Conquest. This gift caused some debates in the city due to the naked human form. They had to reject the innocent gift. Later on, Florence gifted another David of Michelangelo copy to Jerusalem but this time the sculpture had some clothes on to prevent any debates.

Best Archeological Museums in the USA