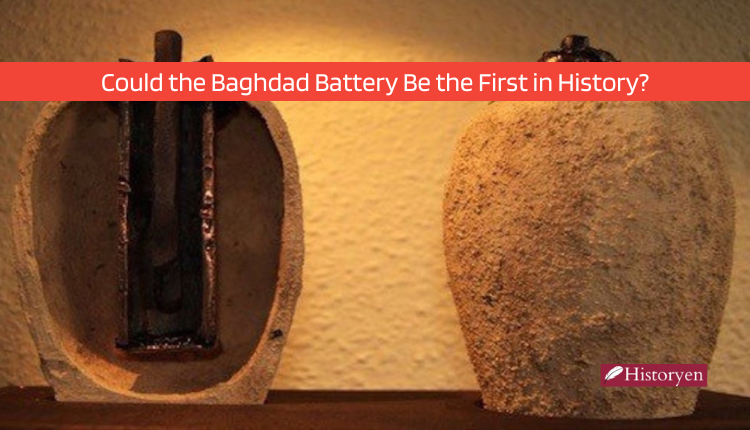 The Baghdad Battery is a clay pot that can generate electric current made 2000 years ago. The Baghdad Battery, found in 1938 during excavations in the town of Khujut Rabu, near Baghdad, Iraq, is an earthen vessel with an iron rod, about 5 inches high, with a copper cylinder inside. Studying the earthenware pot and its contents, scientists have discovered that this object is capable of generating electric current.

The copper wire on the object, which is determined to have been produced between 250 BC and 224 AD, has been slightly corroded, possibly due to some substance such as wine or vinegar used to power the battery. According to the researchers, this ancient battery can generate an electric current of about 2 volts. So why was this mysterious artifact made?

Khujut Rabu is part of the site of the ruins of the Tower of Babel. So there are many lost civilizations and buried secrets waiting to be uncovered here. Although 60 years have passed since the discovery of the Baghdad Battery, its intended use is still a mystery. The Parthians, the people who lived there at that time, are known for their expertise in wars, not for any intellectual or scientific breakthrough. Therefore, it is said that the pottery found is actually Sassanid-made.

How the ancient Persians obtained scientific knowledge to generate electricity is unknown. There are various theories about what this two-volt electricity-generating device is used for. One of the most surprising theories is that the device may have been used as a pain reliever. In ancient Greece, it was aimed to relieve pain by rubbing electric fish on the soles of the patient’s feet. But the electric current of 2 volts is too low for this purpose.

Maybe it was something a cunning ancient priest did. This pottery, which may have been placed inside a statue of an ancient god or idol, may have caused people to see a glow and feel a tingling sensation when they came to worship and touched the statue. Because worshipers cannot know the pottery inside the statue, they may think that the statue really transmits energy.

Could ancient Mesopotamians have developed the battery 2,000 years ago? These batteries were perhaps used to power the electric light globes in the Egyptian pyramids, the galvanic jewels, the lighthouse in Alexandria. Similar clay pots were found during excavations near the ancient city of Seleucia. There were several other clay jars of similar size containing hollow copper cylinders. Only a small glass bottle was found in a clay jar.

According to one important theory, the Baghdad Battery may have also been used to gild metal with silver or gold or to coat jewellery. However, nothing gilded from the period of the object was found.

Another theory suggested that technologically advanced extraterrestrials visited Earth in ancient times. However, most archaeological research concludes that the battery was a decayed papyrus scroll. Such scrolls were usually wrapped around a wooden or iron rod and placed inside a sealed copper tube or glass bottle. The parchment was then stored in a clay jar. The Baghdad Battery was one such jar and was clogged with asphalt to protect it from the weather and water. Because the neck of the jar is broken and there are bits of asphalt sticking to the inside of the mouth.

Archaeologists discovered that in the cylinders were the remains of plant fibers, possibly papyrus. Pots with prolonged exposure to the elements may have rotted the papyrus or parchment inside. This will likely leave a slightly acidic residue. None of the archaeologists believe that these artifacts are batteries.