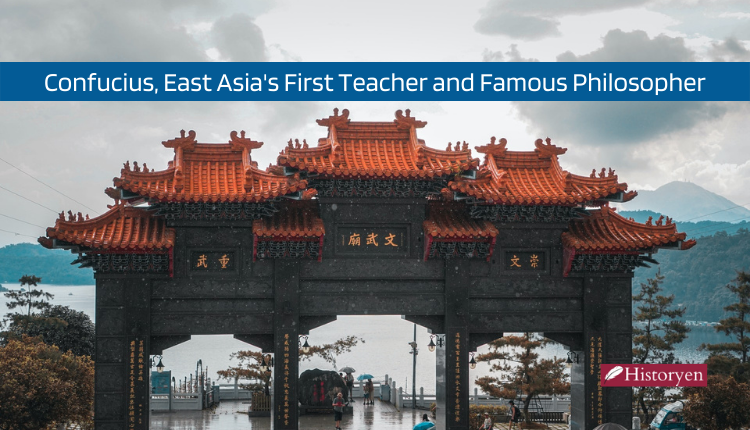 Confucius is a Chinese philosopher born in the 6th century BC. He has deeply influenced Chinese culture and his thoughts are expressed in the philosophy of Confucianism. Thanks to his teachings, he is considered the first teacher. At the heart of his philosophical ideas are the importance of ancestor worship, a virtuous life and devotion to parents. He said that thrifty and charitable administrators and teachers are important role models for wider societies.

It is known that Confucius lived between 551 BC and 479 BC in the province of Lu, now known as Shandong Province. The earliest written record of him is in the Historical Records of Sima Qian, about four hundred years after his death. Growing up in the city of Qufu, Confucius grew up doing the tasks given by the Prince of Lu. He served as Director of Public Works in 503 BC and Director of the Department of Justice in 501 BC. Traveling to many places within China, Confucius set up a school to spread his teachings when he returned to his hometown. Confucius saw himself as a transmitter rather than a creator of ancient moral traditions. His school was open to all students, both poor and rich.

Confucius was also writing while he was teaching. He had the Book of Documents and the Book of Odes, where he kept his poetry collections. Lu’s history books were the Book of Changes and the Spring and Autumn Annals. It is accepted that the most reliable document of Confucius’ ideas is the Analects. Even in this book there is no conclusive evidence that the words and short stories were spoken by him. The lack of clarity and context leaves many of his teachings open to individual interpretation. The other three main sources of Confucian thought are Mean, Mencius, and Great Learning. With these four books, Confucianism became the official state religion of China from the 2nd century BC.

Confucianism has always been concerned with ethics and morality. It explained that people should live in moral harmony, dominating their environment and providing appropriate management. It has been mentioned that anything one does affects others, that is, moral harmony. It has been said that there is only one political system and one true method of living. The scriptures contain the right methods. If society fails, it is because of misinterpretation of scriptures and texts.

According to Confucius, administrators and teachers should be exemplary leaders. The rulers, who had to win the respect and love of the people, had to be generous and benevolent. Based on this, Chinese education preferred the development of moral sensibilities rather than intellectual skills. Chinese politics has also been influenced by this, and has focused on the closeness of relations rather than institutions.

Confucius died in 479 BC. During the Tang Dynasty, temples were built in the name of Confucius, who was buried in his family’s tomb in Qufu. During the imperial period, a thorough knowledge of the basic texts of Confucianism was required to pass the examinations for selecting civil servants. Statues of Confucius and tablets of his writings were prominently displayed in the homes of aristocratic families and educated people. In statues, Confucius often sat on a throne and wore an imperial robe. This was done to symbolize his status as throneless king. No contemporary portrait of Confucius has survived. The way he is depicted is an old and wise man with long gray hair and a mustache, sometimes holding a scroll in his hand. Confucian influences are still evident in East Asian and Chinese culture today.