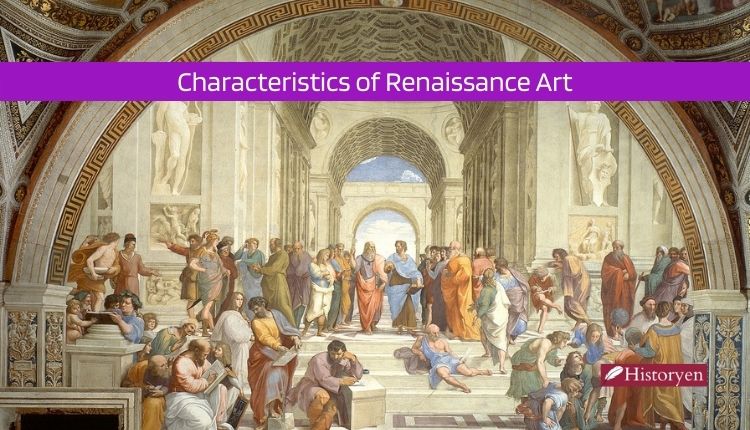 Renaissance was the dominating art movement for about two centuries and today, people still admire the works produced in this era. This movement was centered on Italy and was the dominant movement in the art world between 1400 and 1600. Renaissance was not only dominant in painting but also architecture, sculpture, drawing, and other art disciplines.

If you would like to learn more about this movement, then you are going to love this guide. We have covered ten characteristics of Renaissance art for you in the following!

It is no surprise that Christianity was one of the popular topics in Renaissance art. Considering that this movement was born in Italy and became the dominant art movement for two centuries, it is quite normal for artists to prefer Christianity as one of the main topics in their works.

Merchants were quite important people in those times. They were all well-educated and rich people, who could afford to pay famous artists to make their paintings. As a result, merchants became an important theme for this movement. There are hundreds of paintings of merchants that were created during this period.

Artists used to be aware of the perspective before the Renaissance and they used to use it. However, during the Renaissance movement, this became one of the fundamental topics, especially in paintings. All the artworks created during this period perfectly reflect the principles of perspective.

Without a doubt, Leonardo da Vinci is the most important artist when the proportion is in question. However, all of the other artists used this principle in their work as well. The golden ratio is one of the golden rules of Renaissance Art.

Although Renaissance Art dominated all the art forms, we cannot deny that the number of oil painting works can easily outnumber the works in other art disciplines. One of the main reasons for this is merchants as well. Artists get paid high amounts of money to make the oil painting portraits of nobles and merchants so that they could support their art and studies.

Did you know that the Renaissance word comes from the Italian word rinascita, and this means rebirth in English? This was also a reference to the booming economy of Europe. However, rebirth was also an important theme in the artworks created during the Renaissance period.

The Renaissance did not only affect art. In fact, it affected the lifestyle of Europeans. This period is one of the best periods in human history. During this period, the humanism concept was created, and it became one of the popular themes used by artists.

One of the important characteristics of the Renaissance is classism. During this period, many forgotten or hidden classical texts were revealed. This had an impact on this art movement as well. Besides the content, this principle also influenced the style of the artists significantly.

These were the ten characteristics of Renaissance art. Do you have any other concepts that you would like to add to our list? If so, leave a comment on this article.

Some Grand Prismatic Spring Facts You May Not Know