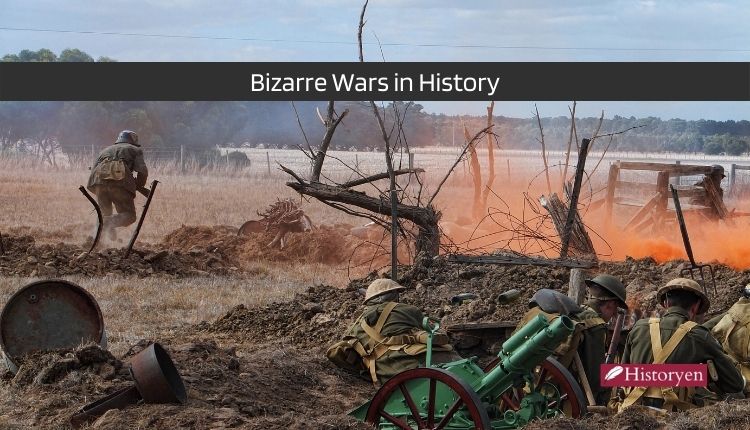 Humans have been at war with each other for thousands of years, and wars often have a reason or another. Declaring independence, stopping genocides, giving oppressed people a homeland or defending the homeland against invaders are common causes of war. Some wars in history were very strange, we can talk a little about them.

Located between Canada’s Vancouver Island and the US mainland, San Juan Island was shared by both British employees of the Hudson Bay Company and American settlers. The island was normally shared and there was general peace on the island, but both countries began to lay claim to the island in the northwest. Tension in the region turned into war in June 1859 when an American farmer shot an English pig for damaging a potato crop.

The British arrested the farmer for this behavior. When the US military became aware of the situation, they sent Captain George Pickett to the island with a company of soldiers. These soldiers claimed that the island was American property. In response, the British sent the Royal Navy to the island. This situation could have almost caused more tension between the two countries, but the two countries took a joint step and got joint custody of the island.

The War of the Stray Dog

Greek soldiers invaded Bulgaria in 1925. The Bulgarians and Greeks, who had already fought in two great wars since the early 1900s, were still very nervous. Bulgaria had deployed soldiers on its borders. On October 18, 1925, a Greek soldier entered the Bulgarian borders while chasing his dog. Bulgarian guards shot this Greek soldier. The Greek government issued an ultimatum after this event.

Greece demanded 2 million francs compensation for the victims, punishment of those responsible and a formal apology. Bulgaria did not respond to Greek requests within 48 hours. In response, Greek troops were sent to occupy the border town of Petrich.

A few hours after deployment, the League of Nations, the pre-WWII version of the United Nations, ordered a ceasefire. The League of Nations ordered Greece to pay Bulgaria 45,000 GBP in compensation. After 50 people were killed in brief clashes across borders, Greece finally capitulated. Greek soldiers left the area shortly after. Sparked by a stray dog, the war lasted 5 days and left 50 people dead.

After the collapse of the Soviet Union, the former Soviet bloc country Moldova began to experience a crisis. One-third of the country wanted to establish closer relations with Russia, while two-thirds wanted to stay close with Romania. This situation eventually turned into a war. The strange thing about the war was that those who fought during the day gathered together at night to drink together. The soldiers, who had fun together at night, even made agreements not to shoot at each other when they saw each other in battle the next day. This situation continued almost every night throughout the war.

On August 27, 1986, the Anglo-Zanzibar War was fought between the Sultanate of Zanzibar and the United Kingdom. This war was the shortest known war in human history. The war that started lasted for a total of 40 minutes, as the British replaced the candidate of their choice as the ruler of the Sultanate of Zanzibar. Britain attacked with two warships and three cruisers, with a total of 1,050 soldiers. The Sultanate of Zanzibar had artillery, 2,800 soldiers, machine guns and the royal yacht HHS Glasgow. The British launched an attack, bombarding the palace. In this way, although they were few in number, they caught the Zanzibar artillery off guard and neutralized them. Only one soldier was injured from the British forces, who also destroyed the royal yacht HHS Glasgow with a naval operation.

The Battle of the Ice

The Battle of the Ice between the Livonian branch of the Teutonic Knights, mostly Estonian, and the Novgorod Republic, took place on April 5, 1242. Soldiers of the two countries fought over the frozen Lake Peipus. The two sides met at the narrow strait connecting the southern and northern parts of the lake. While the Russians, whose numbers were around 5000, and the Crusaders, which were around 4000, were fighting, the Crusaders began to retreat. As the thin ice collapsed, all the armored soldiers fell into the water. As a result of the war, the Narva River and Lake Peipus became the permanent borders separating Eastern Orthodoxy from Western Catholicism.