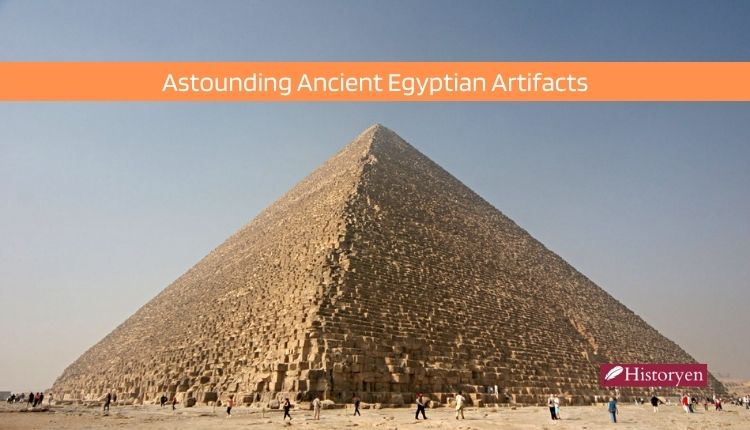 Egypt, especially Ancient Egypt is the home of many astounding artifacts, which we still cannot solve their mysteries today. Without a doubt, this civilization was ahead of its time, and it still manages to amaze us today.

Pyramid-Age papyri are one of the documents that were found in 2013 and it includes the plans of Giza. Giza is the largest pyramid that was ever built in Egypt. This papyri also includes information about how the limestone used in the pyramid construction was brought to Egypt.

In this regard, it is considered one of the most important Ancient Egyptian artifacts since it revealed a great mystery about Giza. The papyri were also created during Khufu’s reign.

We all know that pharaohs are buried with a coffin that looks like them. In 1939, the coffin of a pharaoh called Psusennes was discovered in Tanis. His coffin was made of silver, and this is why we started to call him the Silver King.

Although most of his belongings did not survive due to the humidity in his grave, his organs managed to survive. They were in canopic jars, which are used to keep the organs of pharaohs.

Archeologists were shocked in 1995. There was a tomb called KV5 and none of them paid lots of attention to it because of its small size. Many of them believed that it was not worthy enough to investigate while there are greater tombs in the area.

However, in 1995, it was found that Tomb KV5 was the largest tomb that researchers have ever discovered in Egypt. There are more than 120 corridors in the tomb and today, the excavations are still ongoing.

In 1998, archeologists discovered something amazing around the Giza pyramid. They found a buried city in the Giza Plateau. It is believed that the workers who constructed the Giza pyramid used to live in this town during the construction.

Besides houses for workers, there were also barracks and the houses of senior officials. This town provided detailed information about how the Giza pyramid was built and how the workers used to live in those conditions.

Only in eleven years, more than 500,000 papyri were discovered in Oxyrhynchus, which was one of the towns that flourished while Ancient Egypt was under the control of Rome. These papyri provided plenty of information about Ancient Egypt.

Some of them even included magical spells, details of a wrestling match, and Christian gospels. This took place between 1896 and 1907. Today, researchers are still working on these papyri to translate their text to learn more about Ancient Egypt.

Rosetta Stone is also one of the important Ancient Egyptian artifacts. This ancient stone dates back to 196 BC and it includes a declaration of priests about the rule of pharaoh Ptolemy. He was only three years old when we started to rule the entire country.

It is worth noting that this stone was written in three languages. These languages were Greek, Demotic, and hieroglyphic. The stone was found in 1799 during a military expedition.

King Tutankhamun, or the child king, is one of the most popular pharaohs today. He is full of mystery and is famous for being the youngest king in Ancient Egypt. His tomb and the golden coffin were discovered in 1922.

His tomb was full of exotic goods and riches, one of them being a pair of daggers that were made of meteoroid iron.

Everything You May Wonder About Pergamon Theater