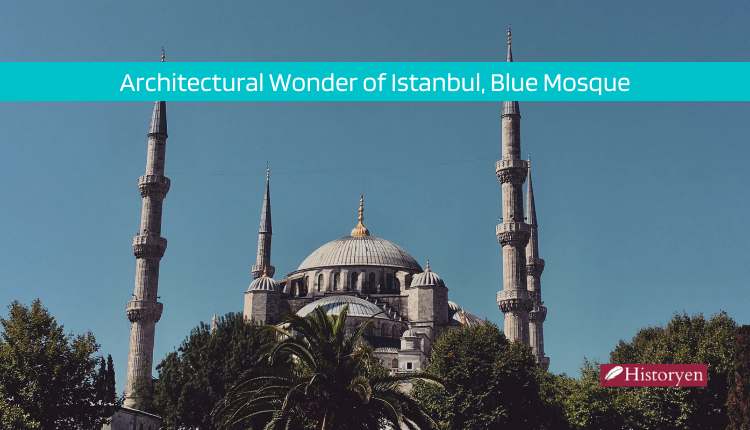 The Blue Mosque is the most magnificent of the Ottoman mosques and has six minarets. The architect of the mosque, which was built during the reign of Sultan Ahmed I between 1609 and 1616 AD, is Architect Mehmet Ağa. Its conception and design is the same as the traditional architectural style of the period. Inside the mosque, there is a madrasah (school), a tomb and a square. The building owes its name to the richness of the blue ceramic Iznik tiles that adorn the interior. The mosque, which is still actively used, is one of the most touristic places in Istanbul. Hagia Sophia and Topkapi Palace are also a few minutes’ walk away.

During the reign of Sultan Ahmed I, the sultan lived in Topkapı Palace. The mosque, which is planned to be built right next to Hagia Sophia and the Byzantine Hippodrome, was built after 7 years of construction. The mosque has six slender and high minarets and the domes of the mosque are perfectly combined. The mosque offers a magnificent panoramic view when viewed from both the hippodrome and the sea.

Inside the Blue Mosque

The design of the Blue Mosque was built to reflect the power of the Ottoman Empire and to be an imposing structure. In fact, it was built directly opposite Hagia Sophia as a more majestic and detailed structure. It has a large central dome and semi-domes surrounding it. Tens of thousands of handmade ceramic Iznik tiles decorate the interior of the mosque. The interior, which is decorated with different floral motifs, usually tulips, receives natural light with nearly 300 windows.

Mosques in Turkey usually have 2 minarets, rarely 4 minarets. According to a rumor, the sultan asked the architect to build a golden (Turkish: altın) minaret, but the architect misunderstood and built six (Turkish: altı) minarets. As a result, although a unique structure was built in Turkey, the 7th minaret was ordered to be added to that mosque so that it would not have the same number of minarets as the Prophet’s Mosque in Mecca.

Architecture and Parts of the Mosque

The Blue Mosque has a large courtyard and a place of worship. There are tombs, hospitals, caravanserais, madrasahs, social complexes, soup kitchens and fountains around the mosque. Mosques built during the Ottoman period were generally similar to each other and did not have too many ornaments and architectural details. However, the Blue Mosque has a wonderful appearance with hundreds of windows and engravings. To enter the courtyard from the outside and enter the temple from the courtyard, one must pass through huge gates. The marble mihrab in the place of worship directs the believers to the location of Mecca for prayer. On the right is a pulpit with a long staircase.

Both the domes and columns of the mosque are filled with geometric strips and arches. The place of worship has three doors, and when you enter from any of them, wonderful walls inlaid with Iznik tiles are visible. The entrance to the Blue Mosque, which is always open for Muslims except prayer times, is free. Things to watch out for are removing shoes when entering the place of worship of the mosque, and women covering their body and hair.

From the Blue Mosque to the Grand Bazaar, the Archaeological Museum, Hagia Sophia, Topkapi Palace and the Basilica Cistern are very easy to reach and are all within a few minutes’ walking distance. All these historical buildings adorn the silhouette of Istanbul and are among the most beautiful examples of Ottoman architecture. The Blue Mosque has been on the UNESCO World Heritage List since 1985 and is one of the most visited historical buildings in the world.