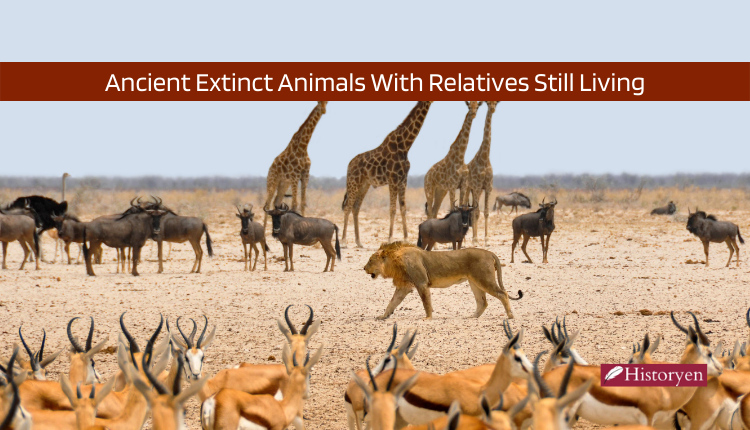 Many of the animal species that once existed on earth no longer exist today. Animals can become extinct due to climate changes, uncontrolled hunting, insufficient food or diseases. Expansion of agricultural lands, changes in sea level, reduction of forests, pollution, habitat destruction have also caused the extinction of animal species. In the content we will see 6 examples of extinct ancient animals whose relatives are still alive.

This small species of fish, which once lived in California in the waters of two hot springs in the Death Valley, was resistant to living conditions. The fish, which could endure living in water with a temperature of 43 C, also had an adequate food supply. In 1965, the water fountains where Tecopa Pupfish lived were combined and a bath was built. After the water fountains were turned into baths, the water became so salty and hot that the fish could not live. Added to the endangered species list in 1970, the last of these small fish died in 1981. Thus, this animal species became extinct.

Woolly mammoths, the ancestors of today’s elephants, migrated from Africa to North America and northern Eurasia 3.5 million years ago. Weighing more than 7 tons and 5 meters long, these gigantic animals had large fur and curved teeth that could extend up to 5 meters. Due to climate change and hunting by humans, woolly mammoths disappeared 10,000 years ago. The species is thought to have gone extinct after the last of the isolated woolly mammoths died on Wrangel Island in the Arctic Ocean around 1700 BC.

Josephoartigasia mones was a giant rodent the size of an average cow. This rodent with huge teeth was fighting saber-toothed cats. This animal, thought to weigh around 1 ton and be 10 feet long, was discovered by a paleontologist in Uruguay. The capybara, still living in South America, is thought to be a modern cousin of Josephoartigasia mones. The size of the capybara is of course much smaller.

Andrewsarkus is the largest carnivorous mammal ever known. There has been no new fossil of Andrewsarcus for nearly 100 years, and no bones have been found in previous fossils, except for the skull and feet. Known to be closer to the wolf and bear families, not the cat, and to be about the size of a rhinoceros, this species was very strong during its lifetime. There is no clear information about why it became extinct.

It is a flightless seabird that breeds and lives in colonies on rocky islands in the North Atlantic, such as the Faroe Islands, St. Kilda, Iceland, Newfoundland and the island of Funk. The wings of these birds, measuring 75 – 80 cm in average, allowed them to swim underwater. Great auks were hunted by hunters in the early 1800s. Uncontrolled hunting by predators was enough to wipe out defenseless great auk colonies. The last known specimens were killed and extinct in 1844 for a museum collection on the island of Eldey in Iceland.

Distant relatives of the modern animal komodo dragon, magalanias weighed more than 1,300 pounds and were 18 feet long. These animals, thought to have become extinct in Australia 50,000 years ago, are thought to have encountered the earliest Aboriginal people.