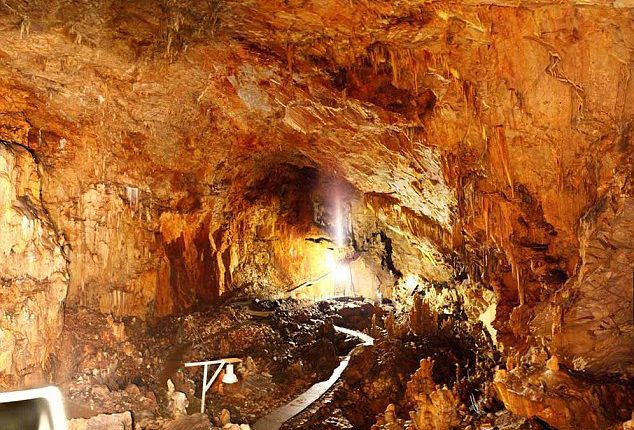 Alepotrypa Cave is one of the most significant Neolithic sites in Greece, and it may even be the birthplace of the Greek Underworld, Hades.  With its sprawling size and cavernous openings, Alepotrypa holds one of the largest known Neolithic burial sites in all of Europe.  Through the discoveries in and around the cave, archaeologists have begun to piece together the lives of the people who called the cave home thousands of years ago.

The Neolithic era in Greece, like elsewhere, was a period of transition.  Beginning in Greece around 7000-6500 BCE, people that had once relied on a hunter-gatherer lifestyle slowly transitioned to farming and the domestication of animals.  Permanent settlements began to take shape throughout the land.  Society was evolving, leaving the primitive Stone Age behind and setting the foundations for the future of humanity.

No longer constantly on the move for game, permanency brought with it more time to devote to artistic pursuits.  The Neolithic era birthed great innovations, not only in farming and agriculture, but in pottery, architecture, and weaponry as well.  Vast trade networks began to emerge, and ideas flowed freely between nations.  In Greece, religious ideas that would someday become the classic Greek pantheon we know today, were just beginning to form in the collective imagination.

Alepotrypa Cave sits on the Mani peninsula in the southern Peloponnese of Greece.  While thoughts of modern Greece might conjure up images of clear blue waters and bustling cities filled with stark white buildings, the Mani region is uniquely different.  The area has been large inaccessible since it was first settled thousands of years ago.  Until quite recently, many of the villages could only be reached by sea as no connecting roads existed.  There is a distinctly different feel to this region with its rugged mountains and sparse vegetation.

Alepotrypa itself is a massive, sprawling complex of caverns.  The cave stretches almost 3300 ft (1000 m) into the mountain.  Its main chamber stands roughly 200 ft (60 m) tall and stretches around 330 ft (100 m) wide.  Alepotrypa is so large that it even contains its own freshwater lake.

Artifacts and burials at Alepotrypa tell us that the site is one of the oldest, and most important, Neolithic sites in the region.  Humans have inhabited the cave and its surrounding area since at least 6000 BCE.  Although there is evidence that humans had once lived inside the cave, Alepotrypa was primarily a site for burials and related religious activities.

Thousands of artifacts have been recovered from Alepotrypa cave since excavations began in the 1970s.  Archaeologist have uncovered hearths and clay ovens, pottery, tools, ornaments made from a variety of materials, agate beads, arrowheads, and weapons.  Obsidian blades from the Greek island of Milos, and ivory likely from Lebanon, prove the inhabitants of Alepotrypa were well-connected.  Extremely rare silver jewelry found at the site indicates that the area was also quite wealthy.  At its peak, the village around Alepotrypa (today called Ksagounaki) was home to hundreds of people, making it one of the largest known Neolithic settlements in Europe.

Some of the most fascinating finds from Alepotrypa come from the burials themselves.  So far, archaeologists have excavated the bones of at least 170 different individuals.  From testing conducted on the remains, we know that the people survived on a diet consisting primarily of wheat and barley and often suffered from anemia as a result of their sparce intake of meat.  Many of the skulls found in the cave show signs of a rare condition called metopism.  Adults with metopism have unclosed cranial sutures, a feature normally seen only in small children.  As metopism is most often genetic, its safe to assume that the skulls represent genetically related families.

Many of those buried in Alepotrypa, around 31%, exhibit signs of blunt force head trauma – the most found in any Greek Neolithic site.  The wounds are often small, circular, and non-lethal.  Whoever the aggressors were, they did not distinguish their victims by gender or age.  Males and females, teens and adults, all bear the same types of wounds.  Life was not easy in the Neolithic age, and brutality was often used to ensure survival.  The average life expectancy in Alepotrypa and Ksagounaki was only 29 years.

Perhaps one of the most fascinating finds at Alepotrypa are three double burials discovered just outside the cave at the top of a terraced slope.  The burials date between 4200-3800 BCE.  One grave contains the remains of a child and a newborn.  A second burial contains a young man and woman buried facing each other.  The third became a media sensation when it was uncovered and features a young man and woman in a loving embrace.  The man lies behind the woman with his arms wrapped around her.  Their legs are intertwined.  The pair have been locked in this eternal embrace for 5800 years.  Archaeologists on the site believe the pair either died in this position or were placed into it shortly after death.  As of now, we still do not know how they died.

At the entrance to the largest, cathedral-sized, room in Alepotrypa, archaeologists have uncovered massive piles of burnt animal dung.  Nearby, hundreds of broken pottery shards have also been found.  These two finds indicate that the people of Alepotrypa performed elaborate funerary rites, ritually breaking pots beneath the flickering illumination of the fires.

Alepotrypa was abandoned around 3200 BCE after a catastrophic earthquake caused the cave entrance to collapse.  Those caught inside the cave were entombed along with their dead ancestors.  The cave lay untouched and sealed until the 1950s when a small entrance was discovered by a local hunter.  Although it seems that the cave, and its extensive burials, had not been forgotten in antiquity.

Archaeologists working at Alepotrypa were astonished to find a Mycenean ossuary dating from the 2nd millennium BCE at the site.  Alepotrypa had been uninhabited for centuries by the time of the Myceneans.  But the ossuary found was clearly Mycenean and contained the weathered bones of dozens of individuals.  These bones had once been buried somewhere else, possibly for a considerable amount of time.  So why were they dug up and transported to the area of Alepotrypa?

The answer to the Mycenean mystery may lay at Tainaron, a site not far from Alepotrypa.  Known as Poseidion in antiquity, Tainaron was once home to a “death oracle” of Poseidon, the sea god.  Built into a cave believed to be one of the gateways to the Greek Underworld, the temple of Poseidon at Tainaron served as a connection between worlds.  Those who visited the temple would attempt to make contact and communicate with the dead or would seek help unraveling the mysteries of their dreams.

Myth tells us that it was at Tainaron that Heracles (Hercules), Greek hero and son of Zeus, emerged from the Underworld carrying the three-headed dog, Cerberus, during his famous twelve labors.  It is also the cave where Orpheus attempted to lead his dead wife, Eurydice, back from the Underworld after convincing Hades, god of the dead, to release her.  These myths, and the temple of Poseidon at Tainaron, all came after the Mycenean period.  So how do the two connect, and what does any of it have to do with Alepotrypa?  Giorgos Papathanassopoulos, lead excavator at the Alepotrypa site for many years, has the potential answer.  He believes that the memory of Alepotrypa Cave and its sacred burial ground may be the connecting thread to both the Mycenean ossuary and the death oracle at Tainaron.

The Greek pantheon and religion that we know today did not yet exist at the time Alepotrypa Cave was occupied.  But it is quite possible that the collective memory of the cave that housed the dead was direct inspiration for the development of the Greek Underworld.  Oral tradition was of great importance in ancient Greece, and it is logical to assume that stories of Alepotrypa would have been passed down throughout the generations.  Such a large and important site, and one with such a tragic ending, would not simply disappear from the minds of those that had lived or visited there in the past.  Their tales would trickle down, evolve, and possibly even give birth to the Greek Underworld, Hades.

It was not uncommon for the Myceneans to rebury their dead at important, or religiously significant, sites.  What is different about the ossuary found at Alepotrypa is that there are no known Mycenean settlements nearby.  That means the ossuary was transported a significant distance, across difficult terrain, to be reinterred at Alepotrypa.  It must have been a well-known, meaningful, site to the Myceneans.

Nearby Tainaron may have been inspired by these legends of the Alepotrypa burial cave.  The location may have shifted over the centuries, but the fact that the temple of Poseidon was built into a cave considered a gateway to Hades, is a fascinating connection.  Papathanassopoulos has always believed that Alepotrypa inspired what would later become the idea of the classical Greek underworld.  Of course, it can never be definitively proven, but the presence of the Mycenean ossuary and the site at Tainaron do seem to give credence to his theory.

Whether or not Alepotrypa served as inspiration for Hades, the importance of the site cannot be overstated.  Archaeologists have been able to uncover a people long buried within the mountain, piecing together their lives from broken pottery and scattered bones.  And the site is not finished revealing its secrets.  Excavations continue at the cave to this day, and it’s possible even older remains may one day be found.

Enjoying my articles on Historyen? Join me on Facebook at Laurie Martin-Gardner, Author and Artisan or visit my webpage at www.lauriemartingardner.com.